Further weight has been added to the suggestion that Apple may create a gaming console, with claims that the company is at work on a “physical controller” for such a device.

Among our predictions for 2012 we discussed the theory that the Apple TV, Apple’s set-top box that grants access to movies, TV shows and music, would evolve into a gaming device. While the Mac has traditionally been seen as a poor device for gaming (although this is changing: read about our favourite Mac Games here), there can be no doubt about Apple’s gaming prowess when it comes to the iPhone and the iPad. The iPad’s technological competence is nothing short of incredible when you consider its svelte form, and the new Retina display hints at an impressive future for gaming on the device. Even before the Retina display, impressive iOS titles like Infinity Blade were given an additional layer of detail that approaches the sort of lavish imagery we’re accustomed to on the Xbox 360 and PS3. (Continues below).

The claim that Apple is working on a gaming controller is made in Anandtech’s review of the new iPad. Speaking about gaming on the device, the writer says: “I know of an internal Apple project to bring a physical controller to market, but whether or not it will ever see the light of day remains to be seen.”

We think it’s likely that such a device is in the works, not least because Apple has seen just how lucrative a market gaming on the iPad and iPhone is. The current generation of iOS gaming is arguably giving Nintendo’s Wii a run for its money in graphical terms, what if Apple was to announce a console based on the A5 CPU that powers the iPad 2? Apple is a company that is constantly looking to expand into new and fertile territory, and gaming is another profitable arena that is waiting to be dominated. 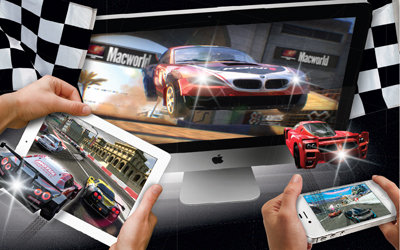 Apple already has contacts in the gaming industry that would help ensure that it’s new system receives the appropriate amount of third-party support; such a machine would be virtually guaranteed input from the biggest developers and publishers, because they’re already behind iOS. Activision, EA, Sega, Konami, Capcom – these video gaming veterans have already taken a chance on Apple, and have reaped the benefits. And then there’s a new generation of developers and publishers – iOS stalwarts such as Rovio, Chillingo, and Gameloft have already created pocket-sized slices of gaming brilliance, and we’re sure they’re itching to prove they have what it takes to entertain on a larger scale.

Just as Apple has torn up the rulebook on pricing in the mobile arena, it could easily do so again with a games console. When faced with the option of buying a PS3 or Xbox 360 and then having to shell out £30 or more on games, the notion of an Apple console with sub-£6.99 releases could prove irresistible to the average consumer.

Of course, this is nothing more than conjecture, but we’d be shocked if Apple wasn’t watching the home gaming market with envious eyes. With the Wii’s successor now unveiled and Sony confirming that development of the PS4 is underway, the opening salvos of a next-gen war are about to be fired. What better time for Apple to steal the thunder of its gaming rivals by confirming a new, set-top box capable of sating all your multimedia needs: music, TV, movies and games?

We also predict that TV manufacturers will start to offer gaming consoles built into TVs. And with rumours that Apple is planning its own television offering, it seems well placed to compete in this market. Perhaps gaming will be the next revolution that Apple leads.