Last week’s announcement that Hon Hai Precision Industry (the parent company of Foxconn Electronics) is to acquire a stake of almost 10 per cent in Sharp, and almost half of its LCD panel subsidiary Sharp Display Products, has lead to speculation that an Apple Television could be a step closer to production.

The news comes as Apple is granted a patent related to a high refresh rate LCD called Fringe Field Switching (FSS) that Apple states is suited for a TV. Patently Apple explains that the technology is an off-shoot of IPS, the technology currently being used in Apple’s iMac. As Patently Apple points out, the patent for IPS is held by Sharp and it is likely that Apple needs it if it will be using the technology going in its displays and more importantly, televisions. (More below…)

Foxconn’s clients include Apple, so observers have suggested that Hon Hai Precision’s decision to invest in the LCD panel maker shows its confidence that Apple has plans to manufacture an Apple TV, dubbed the iTV.

“This is a risky and aggressive move by Foxconn, which is betting on current and future Apple products, including the iPad and an Apple television, a product which doesn’t even exist,” Financial Holding analyst Vincent Chen, told Bloomberg. 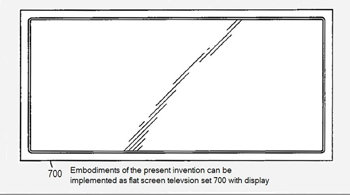 Whether an Apple Television materialises or not, Sharp may supply panels for the iPad. According to researchers at IHS Inc, Sharp is set to begin shipping displays using its advanced screen technology – IGZO – for the new iPad in April.

IGZO, or Indium gallium zinc oxide, is a semiconducting material that can replace amorphous silicon for the active layer of an LCD screen. It has forty times higher electron mobility than amorphous silicon, so it allows either smaller pixels and a or higher reaction speed for a screen.