Steve Jobs biographer Walter Isaacson doesn’t agree with Google CEO Larry Page, who is claiming that Steve Jobs anger at Android was all “for show”. Speaking at the Royal Institution last night, Isaacson outlined why Jobs felt such ‘thermonuclear’ anger at Google for stealing the iPhone interface.

To explain the significance of the current dispute with Google, Isaacson told the story of how Microsoft stole Apple’s graphical user interface back in the 1980s. (More below)

Isaacson emphasised that Steve Jobs believed in a closed system, where you control the hardware to go with the software. When Bill Gates took Apple’s graphical user interface that was bad enough, but what really infuriated Jobs was that Gates licensed the interface out “promiscuously”, to Dell and Compac, and IBM, and so on. As a result, “Microsoft ended up being dominant.”

Then history turned against Jobs, he was ousted from Apple. Then Jobs returned. He did the integrated system again, iPod, iPad, and it worked, “but what happens? Google rips it off”. 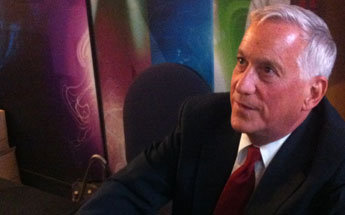 Isaacson continued: “It’s almost copied verbatim by Android. And then they licence it around promiscuously. And then Android starts surpassing Apple in market share, and this totally infuriated him. It wasn’t a matter of money. He said: ‘You can’t pay me off, I’m here to destroy you’.”

As for what will happen now that Jobs isn’t around to go ‘thermonuclear’ on Google, Isaacson thinks that Apple CEO Tim Cook will handle things differently. “Tim Cook will settle that lawsuit”, Isaacson added.