Analysts who last week predicted that Apple could see its share price rise to $1,001 over the next 12 months, credited growth in China as one reason for the high expectations. Now it has emerged that Apple sold 21 million iPhones and iPads in China by the end of 2011, with approximately ten per cent of those in the urban centres owning an iOS device.

Analyst Stenvall Skoeld’s estimate put the total number of iPhones and iPads in China at end of 2011 at 21 million active devices. More than half of these iOS devices were found in Beijing, Guangdong and the Yangtze Delta Region which includes Shanghai, Jiangsu and Zhejiang. (More below).

This 21 million represents 10 per cent of the population in China’s urban centres, according to Skoeld. Skoeld wrote: “In Beijing and Shanghai there is one iOS device for every nine and eleven people”. 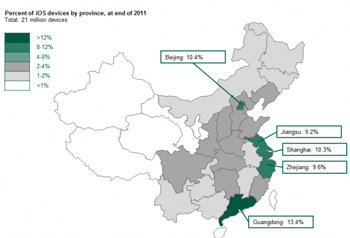 However, he noted, in the rest of China “penetration is still very low”.

Skoeld calculated the iOS penetration rate in all Chinese provinces and municipalities using his own figures and data from Chinese mobile research firm Umeng.