That’s the view of analyst firm IHS iSuppli, which believes that Apple is facing the same kind of crisis that Nike faced in the 1990s. Back then, Nike and other clothing and footwear brands were criticised for using ‘sweatshop’ manufacturing and the resulting furore resulted in the birth of the Fair Labor Association (FLA) – the same organisation that Apple has invited to inspect its manufacturing partners’ plants.

Much of the media attention on the issue has focused on Foxconn after a series of articles in the New York Times revealed concerning details about working conditions in some of the company’s facilities, which added to earlier concerns raised by a spate of worker suicides and accidents. Though Foxconn is a manufacturing partner of many consumer electronics companies, its relationship with Apple was highlighted in the reports and led to Cupertino calling for the FLA to get involved.

At the end of March the FLA published the results of its early investigations into working conditions at Foxconn plants, saying that there were “significant issues” to deal with. Subsequent reports have questioned whether changes necessary to satisfy the FLA would impact on Apple’s profits and the price of Apple products, though IHS iSuppli warns that there is another issue to deal with.

“Much of the press coverage of the FLA investigation has focused on the impact it will have on Apple’s margins or on prices that consumers will pay for iPhone or iPads,” said Thomas Dinges, senior principal analyst, electronics contract manufacturing for IHS.

“While the recent focus has been on Apple and Foxconn, the fact is that nearly all electronics brands make use of contract manufacturers. Because of this, nearly all brands are at risk from negative headlines in their local newspapers that could arise from news of worker issues,” Dinges said. 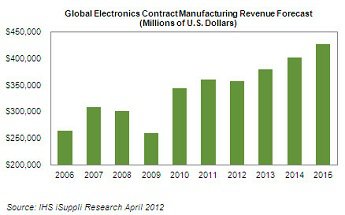 So, IHS argues, now is the time for all electronics brands to ensure that contract manufacturing partners are in compliance with FLA rules. Should these partners increase their workforce and pay scales in order to comply with the guidelines while maintaining output, manufacturing costs will rise.

These rising costs will lead contract manufacturers to seek alternative, lower-cost locations for manufacturing to some extent, IHS believes, but because of the established supply chains and infrastructure in the country, China will remain key to the global electronics industry for the forseeable future.

For its part, Apple has done a good job so far of managing the public relations fallout from the New York Times articles. It was Apple that called for the FLA investigations and the company’s CEO Tim Cook has visited China to see Foxconn’s production lines and meet with senior politicians to discuss the issues. A report on manufacturing process aired on a radio programme in the US compiled by Mike Daisey earlier this year was found to contain significant fabrications, and this month Rob Schmitz, the journalist that uncovered Daisey’s fabrications, was granted access to the Foxconn production lines.

Footage from Schmitz’ report can be seen in a short video clip (below). Overall, the results of his investigations are mixed – it emerges that pay raises promised to workers in March have still not been received and that many find the work repetitive. In addition, some report having been forced to work when unwell and prevented from claiming overtime.

However, Schmitz also highlights the fact that workers have been provided with stools with backs to sit on, contradicting claims in the New York Times’ reports that workers spent much of their time on their feet, while facilities such as swimming pools and basketball courts are provided for workers.