Protesters from Greenpeace have targeted Apple’s European HQ in Cork, Ireland, to publicise its How Clean is your Cloud report.

Greenpeace launched the report earlier this week, singling out Apple, Amazon and Microsoft for criticism over electricity consumption by the data centres used by the tech giants.

Apple has already rebuffed Greenpeace’s accusations that its planned new facility in Maiden, North Carolina will only get 10 percent of its electricity from renewable energy sources such as fuel cells and solar arrays, with the rest generated by coal.

Cupertino said that 60 percent of the power will be eventually delivered on-site from a solar farm and fuel-cell installation “which will each be the largest in the country”. 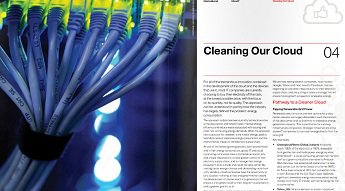 However, Apple’s response wasn’t enough to keep the protesters at bay. Greenpeace sent members of its Greenpeace International team to Apple’s HQ in Cork.

The protesters took a machine with them “that makes logos out of environmentally safe bubbles” though they didn’t go to the same lengths as their colleagues in Turkey who climbed on to the roof of Microsoft’s Instanbul offices and promptly arrested.

“At Apple a lot of the employees seemed open to our message and accepted our leaflets and our free mousemats which we made especially for them,” Greenpeace International’s Leila Deen said.

Meanwhile, Chinese environmental organisation, the Institute of Public & Environmental Affairs, has been singing Apple’s praises for its decision to list its manufacturing partners  for the first time, making it easier for environmental groups to obtain information from suppliers.