The student designer behind the Steve Jobs tribute that went viral after the Apple co-founder’s death in October has landed a job with Coca-Cola.

20-year-old Jonathan Mak, a student from Hong Kong, has now created an image for use in Coke adverts. The design depicts two hands in the ribbon shape used by Coca-Cola on its cans and in previous adverts, passing a bottle to one another.

Creativity Online reports that Mak, who is currently studying at Hong Kong Polytechnic University, said his job with Coca-Cola was a “happy accident”, following the success of the tribute he had posted on his blog when Jobs resigned from Apple in August 2011. Upon Jobs death two months later, the design stormed the web, being reposted on social networking sights and Apple forums across the world.

Mak was then contacted by Coca-Cola, which briefed him to create a design based simply on “Sharing a Coke”. 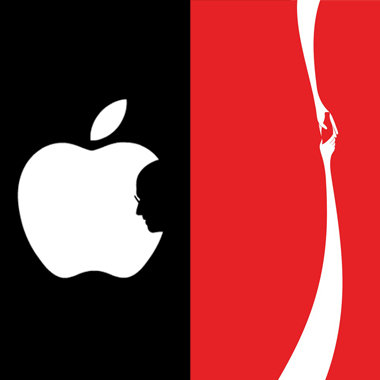 (Above: Mak’s Jobs tribute alongside his new Coke poster)

“I think the way I approached the poster is quite similar to the Steve Jobs Apple logo,” Mak told Creativity. “These kinds of images are quite appropriate in advertising. It takes a second to get it and then there’s an ‘aha’ moment.”

When asked whether he wants to go into advertising when he finishes his studies, Mak replied: “I just want to do good work that can affect people the way the Steve Jobs-Apple logo did.”