Greenpeace has covered Apple’s Regent Street Store windows with its own poster, in protest against Apple’s use of coal in its data centres. Greenpeace says that activists have “plastered the window of the central London store highlighting the dirty energy policies of Apple.”

The environmental organisation decided to take action against Apple following a report that showed over half of the fuel used to power the company’s data centres comes from coal, which Greenpeace says is “one of the dirtiest and most environmentally damaging sources of energy.”

Greenpeace activists went to the Apple’s flagship store in London this afternoon to place the “dark iClouds” in the windows and to talk to customers and staff about the damage Apple’s use of coal can do to the environment. The activists are also giving out Apple logos made from coal.

Jim Footner, Senior Energy Campaigner at Greenpeace, said: “Many of [Apple’s] customers will be shocked that Apple are using coal to power the iCloud. The irony is that Apple has shown it can be environmentally responsible – their European HQ is exclusively powered by renewable energy. So if they can run their HQ with clean power then they can do it for customers’ iClouds.” 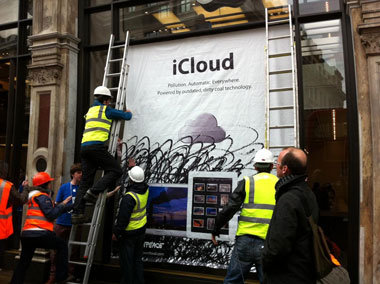 “If they fail to change course the clean image that Apple have worked so hard to develop over many years will be destroyed,” Footner added.

Greenpeace has published a report called “How Clean Is Your Cloud”, which claims that if the cloud were a country, it would rank 5th in the world for its electricity demand. Greenpeace expects the demand for electricity from cloud data centres to triple by 2020, and claim that some data centres use as much electricity as 250,000 European homes.

In particular, Greenpeace is protesting against the new data centre being build by Apple in Maiden, North Carolina, that will rely on coal to provide the majority of its fuel.

Apple has contested claims from Greenpeace that its North Carolina data centre will be mostly coal powered, and says that 60 per cent of the power will be eventually delivered on-site from a solar farm and fuel-cell installation.