A new book reveals a fresh insight into Steve Jobs’ mind, and how his obsession with simplicity drove Apple to success.

Insanely Simple: The Obsession That Drives Apple’s Success was written by creative advertising director Ken Segall, who worked with Jobs on several occasions over 12 years as part of advertising firms including TBWAChiatDay, the company behind famous ads including the ‘Think different’ campaign. The book includes anecdotes including Jobs’ Willy Wonka competition idea, and his dislike for the iPod’s silhouette ad campaign.

Segall says that, to Jobs “Simplicity was a religion”, and it was his most powerful weapon. Segall believes that there are ten elements of simplicity that contributed to Apple’s success, which he breaks down over ten chapters in his book.

These ten elements have the ‘Simple Stick’ at their core, explains Segall. When Jobs hit employees with the Simple Stick during meetings, it meant: “Steve had rejected their work – not because it was bad but because in some way it failed to distill the idea to its essence. It took a turn when it should have travelled in a straight line.” 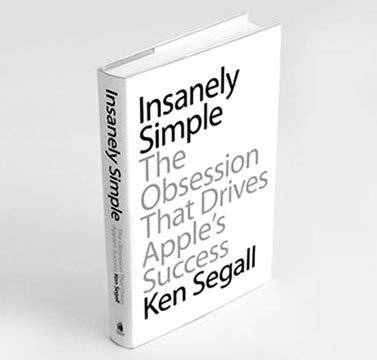 “The Simple Stick symbolises a core value within Apple. Sometimes it’s held up as inspiration; other times it’s wielded like a caveman’s club. In all cases, it’s a reminder of what sets Apple apart from other technology companies, and what makes Apple stand out in a complicated world: a deep almost religious belief in the power of Simplicity,” writes Segall.

Despite his focus on simplicity, MacRumors reports that Insanely Simple also reveals that Jobs wanted to celebrate the millionth iMac in a fun and novel way that certainly isn’t simple: “Steve’s idea was to do a Willy Wonka with it. Just as Wonka did in the movie, Steve wanted to put a golden certificate representing the millionth iMac inside the box of one iMac, and publicize that fact. Whoever opened the lucky iMac box would be refunded the purchase price and be flown to Cupertino, where he or she (and, presumably, the accompanying family) would be taken on a tour of the Apple campus,” writes Segall.

“Steve had already instructed his internal creative group to design a prototype golden certificate, which he shared with us. But the killer was that Steve wanted to go all out on this. He wanted to meet the lucky winner in full Willy Wonka garb. Yes, complete with top hat and tails,” Segall claims.

Unfortunately, Jobs’ idea could not be followed through due to California law that meant contests couldn’t run if a purchase was required to win. In this case, the winner would have needed to purchase an iMac, so the Willy Wonka idea had to be forgotten.

Insanely Simple also reveals that Steve Jobs hated the iPod sillhouette adverts to begin with, and only came around to the idea after the advertising firm continued to push it to Apple’s late co-founder. “It didn’t look anything like any of the ads that Steve had approved in the past – which were mostly white pages featuring a product image and a clever headline,” write Segall. “In that sense, it was ‘off brand’.”

You can  buy the book from Amazon.