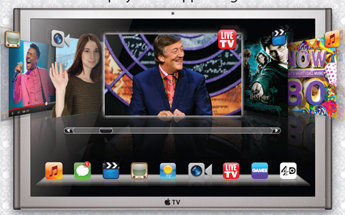 Apple may have a far clever plan to take on the living room than creating an Apple television set. One report discusses the idea that Apple will instead sell transparent screens with a glass bezel that you can fix to the wall in every room of your house.

BusinessWeek columnist Ben Kunz makes the prediction based on a number of reasons outlined below.

Televisions are an infrequent purchase decision – not many people are going to replace the screen they bought two years ago, Kunz writes, noting that sales of LCD TVs shot up between 2007 and 2009, and tapered off in 2010. “The market for big flat-panels has been satiated”, he writes in the report here.

Kunz then notes that: “Apple’s real play will be content sales, not TV hardware profits.” He suggests: “Apple could grab a slice of a $144 billion video market if it could convince us there’s a better way to stream moving images.” 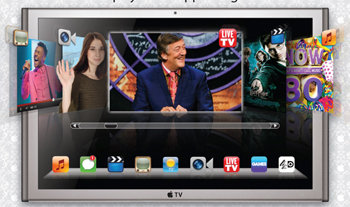 He also claims: “Consumers want to watch video everywhere while multitasking”. According to Nielsen research, consumers watch TV while doing something else (texting, typing on laptops, etc.) Also, “younger demographics in particular are watching video via Hulu and YouTube on computers.” Kunz says: “We want more screens, and we want to do other stuff while watching, so why wouldn’t Apple sell pretty little panels to spread throughout our homes?”

Two things that make the TV experience painful are TV remote controls and TV advertising. Kuntz suggests: “If Apple could clean up remotes and curb ads, consumers would rejoice.”

Another reason: “Steve Jobs loved glass” and: “Jobs loved the simplicity of transparency”.

Kunz also suggests that the screens could use haptic (“touch”) technology (patented by Apple).

Another exciting thought, builds on the idea of haptic feedback: “Video games played over Apple screens could then have holographic gunfighters in your living room, and when you get hit, you’d feel the punch.”

We like the idea that Apple could sell screens that hook up to your Apple TV set top box, and stream content from your Mac and iTunes. Given the fact that these days many people don’t watch TV programmes when they are broadcast, preferring instead to catch up later via iPlayer, 4OD and other streaming services, we think there is definitely logic in the suggestion that Apple wouldn’t hook it’s TV up to the aerial or satellite dish.