Apple has filed 14 new patent applications, which were published by the US Patent and Trademark Office on Thursday. The patents include an advanced new haptics system, a new battery design, a new camera feature, and some modifications to the Mac mini and high-speed cables.

Just before the new iPad was announced, it was reported that Apple could be implementing a new haptic texture display in the tablet, which would create a ‘textured feedback’ by means of a small electrical stimulus. The new iPad emerged with no such display, however, a new patent filed by Apple has revealed a more advanced multi-tiered haptics system, reports Patently Apple.

The system would allow an iPad, iPhone or iPod touch’s display to deform to make a button, an arrow or a map pop out of the screen to give it three-dimensional depth.

The latest patent shows an invention that uses layered haptic controls. Patently Apple says: “Haptic systems may be used for actuation such as vibration, shape change (e.g., contouring a flat surface), or other suitable actuations or combination of actuation which may provide tactile feedback to a user. 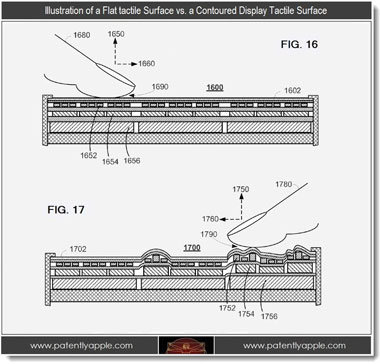 Patently Apple states that in Apple’s new invention: “Stacked arrays may be used to create a contoured screen surface such as, for example, contour maps, shaped buttons, moving contours or shapes, or other surfaces with multi-scale features.”

The tiered haptic display could also be pressure sensitive, a significantly beneficial feature for drawing and painting apps, for example.

Apple’s new high speed cable, as shown in a patent filing published yesterday, would be capable of high-speed data transmission with low insertion loss, and would be flexible so that they can be bent and twisted without getting damaged, reports Patently Apple. The report suggests that the patent could be an indication that the next iPhone will have a round dock connector.

A patent filed by Apple relating to iOS devices’ camera covers the method of deciding the exposure of images. Apple wants to add a “blowout prevention” stage for image processing, to stop overexposure producing pure white pixels in a photograph, or underexposure producing black pixels.

A fourth patent filed by Apple covers a battery design with multiple thicknesses, which could enable iPhones or iPads to be thinner. Last month, we reported that the next iPhone could be 1.4mm thinner than the iPhone 4S, by using a thinner battery, metal back and in-cell technology in the device.

Apple also updated a patent relating to the Mac mini, filed a patent for high-speed memory sockets and interposers and more.