Apple is preparing to launch a new, thinner 15in MacBook Pro with Retina display this summer.

That’s according to 9to5Mac, who reports that ‘trusted sources in the Apple’s supply chain’ have been able to get their hands on a prototype of the new MacBook Pro. (More below)

According to the report, the new MacBook Pro won’t have the tapered design of the MacBook Air, but will be an ‘ultra-thin’, more robust version of the current MacBook Pro.

The sources confirm the rumours that the MacBook Pro will ditch the optical drive, and say that Apple wants users to download applications from the Mac App Store instead. 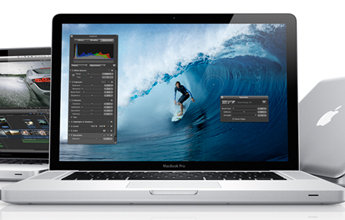 Apple will also give the new MacBook Pro a Retina display, say the sources, adding to last week’s report that Apple is readying OS X for Retina display Macs by creating higher resolution icons for its applications.

The sources describe the Retina display as “jaw-dropping’’ and “definitely the most important Mac innovation in years.”

The new MacBook Pro will have a power button on the keyboard in place of the eject button, say the sources.

“The current prototype unibody casings going through test production have spaces for a charging port, two USB ports, two audio in/out-sized ports, and the battery meter on the left side. The right side is said to have cutouts for two Thunderbolt-sized ports, an SD card slot, and another USB port,” reports 9to5Mac.

Two of the USB ports could be USB 3, says 9to5Mac, which would be the first time USB 3 has been introduced to the Mac. While Apple currently appears to favour Thunderbolt, the sources say USB 3 will run as a complement to Thunderbolt.

It’s been a busy month for MacBook rumours, with benchmarks for new models emerging and resellers dropping their prices in preparation for a new product line.

Intel’s new Ivy Bridge processors are expected to power the new MacBook Pro, and it c ould be made with Liquidmetal to make the laptop lighter and more durable.