Greenpeace infiltrated Apple’s Cupertino campus this week, projecting messages from Twitter and Facebook users who are dismayed at Apple’s use of coal at the data centre that powers its cloud services.

The Greenpeace activists also barricaded themselves inside a “survival device” that had been used to prevent Arctic drilling, according to Apple Insider.

Greenpeace USA Executive Director Phil Radford said: “Apple’s executives have thus far ignored the hundreds of thousands of people asking them to use their influence for good by building a cloud powered by renewable energy. As Apple’s customers, we love our iPhones and iPads, but we don’t want to use an iCloud fueled by the smog of dirty coal pollution,” reports Apple Insider. 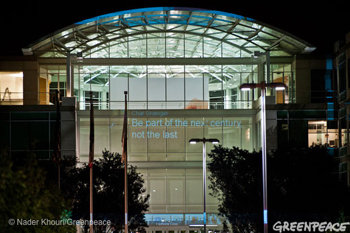 The demonstration was the latest in a series. Last month Greenpeace promoted it’s “ How Clean is Your Cloud” campaign outside London’s Regent Street Apple Store.

Greenpeace’s “How Clean Is Your Cloud” report claims that if the cloud were a country, it would rank fifth in the world for its electricity demand. Greenpeace expects the demand for electricity from cloud data centres to triple by 2020, and claim that some data centres use as much electricity as 250,000 European homes.

Greenpeace is targeting Apple because its North Carolina facility uses coal to provide the majority of the energy for the plant. The “How Clean is Your Cloud” campaign claims that Apple isn’t using environmentally friendly power for its cloud-based services.

However, Apple has contested claims from Greenpeace that its North Carolina data centre will be mostly coal powered, and says that 60 per cent of the power will be eventually delivered on-site from a solar farm and fuel-cell installation currently proposed.