Apple CEO Tim Cook has met with the speaker of the United States House of Representatives at the US Capitol building in Washington.

There is some speculation that Cook was lobbying for a tax holiday that would mean Apple can bring back billions in offshore cash at a low tax rate. Apple has recently come under fire for its tax practices – the company holds $74 billion of Apple’s $110 billion in cash assets offshore to avoid US corporate tax rates. Apple isn’t the only company engaging in this practice.

Cnet highlights the fact that among the list of “Legislative Initiatives” on the speaker’s website is the “Plan for America’s Job Creators.” This plan is focused on creating a better environment for private-sector job growth by eliminating excessive regulations, addressing high energy prices, fixing the tax code, and more. 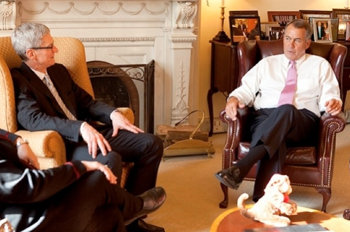 Boehner’s website headline is: “Removing the barriers to American jobs and economic growth.” As well as being criticised for its tax practices, Apple has recently come under fire for creating jobs in China rather than the US.

A recent report from the CRESC research centre suggested that Apple should make the iPhone in the US. “Why are the assembly jobs in China when the assembly work could be done in the United States if Apple’s profits targets were lower?” the report asked.

When asked why Apple isn’t manufacturing the iPhone in the US, Apple’s late-CEO Steve Jobs told US President Barack Obama last February: “Those jobs aren’t coming back.” However, Cook may have been discussing the scope for creating jobs in the US with Boehner.

Apple responded to a New York Times report that criticised its tax practices, claiming that it is “among the top payers of US income tax”, but that wasn’t enough for one US senator who is “livid” about Apple’ only paying 9.8% tax.

Senator Tom Coburn said he is joining forces with Senator Carl Levin to “take a look” at Apple’s tax practices, although Coburn said the probe will look into the broader practice of big corporations relying on tax havens to reduce their tax burden, rather than focusing on Apple’s case.