Official documents published by the US Patent and Trademark Office on Tuesday reveal that Apple has been granted a patent for a steering wheel remote control.

The patent covers a device that clips on to a vehicle’s steering wheel to enable users to control their iOS device while driving, without taking a hand off the wheel, reports Patently Apple.

The device uses Apple’s iPod clickwheel, but has a new touch sensitive design, says the report. It is wireless, and enables users to change track, pause, increase volume and access the menu of the iOS device playing music through the vehicle’s entertainment system. 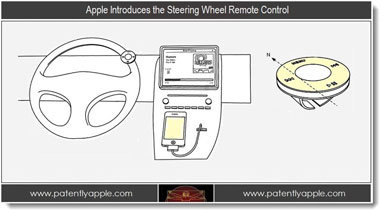