Conmen in Manchester have been selling bottles of water, cans of Coke, and even potatoes under the pretence that they are iPhones.

The conmen have been approaching the public, showing iPhones and laptops and offering to sell them for bargain prices. Having parted with their cash the unsuspecting people open the bag to discover they have been sold bottles of water or Coke rather than the iPhone or laptop they thought that they were buying.

In February, a 40-year-old man was conned out of £900 for an iPhone and a laptop. He received a rucksack containing three bottles of water.

Another man attempted to buy an iPhone and a laptop for £660 but received a bag full of bottles of coke. 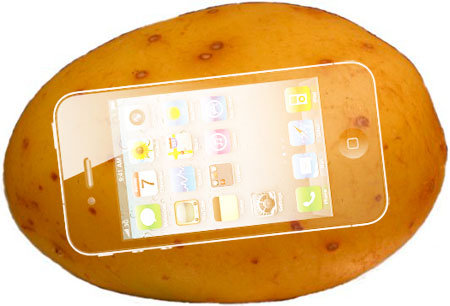 In one case a man spent £1,400 on a bag of potatoes, rather than the two laptops he had been promised. The conmen are thought to have scammed people out of £3,000 since February.

Police describe the conmen as white with Eastern European accents. They are thought to be in their late 30s. One of them has a scarred face from acne and a goatee.

Detective Constable Michelle Wilkinson from the Economic Crime Desk told Manchester Evening News: “It is likely they are continuing to target people across Greater Manchester and I would urge anyone who is approached by them to not give them money.”

“Please be mindful that if you are approached by anyone who are selling electrical goods it is highly likely they have been stolen and by buying the goods, you will also be breaking the law by handling stolen items,” she added.

Last year we reported that Fake iPads made of clay were being sold in Canada. There have also been cases of bricks being placed in iPhone boxes and sold in car parks.