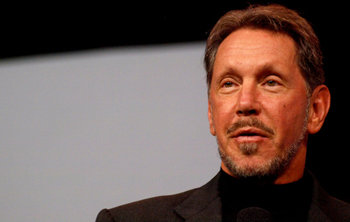 Ellison did most of the talking, and that’s not really surprising given that Jobs and Ellison were good friends having met as neighbours in Woodside. Ellison recalled how they met, telling the following story: “We met when we were neighbours in Woodside. His peacock had wandered into my property and woke me up. Then Jobs said, ‘I’m gonna tell her [his girlfriend] how much you hate this peacock, so we can get rid of it. You gotta back me up.’”

The two CEOs spoke about the reasons for Jobs success, touching on Jobs personality and how he interacted with people. They also spoke about what made Jobs so unique.

Discussing what set Jobs apart, Catmull said: “He truly was unique… Most people don’t have the facility to look at things the way Steve did.” 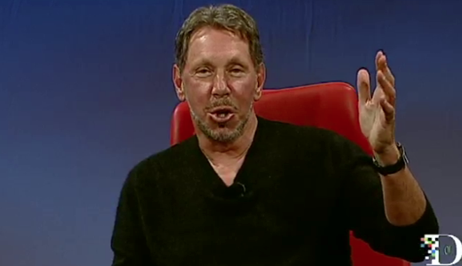 Ellison summed up what made Jobs so unique: “Obsessive-compulsive personalities are not all that rare. But combined with his design sense…” Later emphasising: “If you have that kind of obsessiveness, combined with Picasso’s aesthetic and Edison’s inventiveness…”

Speaking about how elements of Jobs’ personality helped him enjoyed the success he did, Ellison said: “Steve had a singlemindedness and an attention to detail unlike everyone I’ve ever seen. He was a bit of a control freak. A little bit. He wanted to control every aspect. Including how you pay for an item in a store. Or what it looked like in a box. Or how you bought an app, or connected to the Net. Every excruciating detail. Edison said genius was 1% inspiration, 99% perspiration. Steve was a god. He worked tirelessly.”

Ellison continued: “Steve would just not let go of a problem until it was solved. I would tell him, ‘I’m not coming over to watch Toy Story again.’ I said, I know that Renderman is now 4% better, but I don’t care. And Steve would say, “But the shadows are so much better!”

He added: “Steve wasn’t a programmer. But he had enough knowledge of what went into the product. Very smart boy. He learned very fast.

And then there’s the fact that: “Steve was brutal. He desperately wanted Apple to be great,” as noted by Ellison.

Wanting Apple’ to be great didn’t necessarily translate into Jobs wanting Apple to be the most valuable company in the world, but he achieved that too. Ellison said: “Apple became the most valuable company on earth and it wasn’t even one of Steve’s goals. He was obsessed with the creative process and building something beautiful,” noting that Jobs’ focus was always on making the best product, not making the most money from selling a product.

That’s not to say he wasn’t pleased with the financial implications of Apple’s success, he saw that as an indication that he was making the best products. Ellison noted: “He called me up when Apple passed Oracle in market cap…He noticed and he was proud of it. It was just kind of a measure that he was doing the right thing. Therefore what he was building was in fact beautiful.”

How Jobs learned to be more of people person

The conversation also touched on Jobs relationships with colleagues. The late CEO and co-founder of Apple isn’t well known for his skills as a people person, but the general consensus was that if your idea was a good one, he would listen to you, and if you were full of it, he’d tell you.

Ellison said: “Steve was one of those people where the best idea won. But you had to persuade him, and he was a smart guy.”

“He’s very good at listening,” Ellison added. “And if he thinks you’re full of it, he’ll tell you.”

Jobs is famous for changing his mind. Ellison noted: “Well, he’d make the final decision. But when he changes, he changes like that, Bang. He wanted the best.”

Catmull’s experience of working with Jobs at Pixar is a complete contrast to tales of Jobs at Apple. Nevertheless, Catmull said: “It was amazing to see him flip. But he wanted you to argue back.

So why did Jobs shout down colleagues when he didn’t agree with their ideas and then later assign the idea as a good one? Ellison suggested: “Steve was not intellectually insecure. When he decided someone had a better idea, he moved on immediately. He didn’t care. All he cared about was building the best product.”

Despite being a tough boss, Jobs inspired his colleagues to achieve incredible things. Ellison explained: “Steve was a remarkable leader. He inspired people to do great things, whether you call it a pitch or telling a story. You’re working 6-7 days a week, 16 hours a day, Steve would come in and make you feel that what you were doing was important, and you were important. He was an inspirational, charismatic leader. People wanted to be on his team.”

And Jobs changed over the years, according to Ellison: “He learned to temper. He learned to understand that people didn’t enjoy feeling that they were not valuable. As we get older we all learn to be empathetic.”

This change in Jobs’ personality may explain why Catmull’s working relationship with Jobs was so different to those at Apple. “The Steve I knew was very kind and very empathetic with people,” Catmull said. “Those things weren’t there earlier, but he learned how to do it after Next. Learned to listen”.

Catmull spoke about his relationship with Jobs at Pixar. The fundamental difference there was that Jobs trusted the staff at Pixar: Catmull said: “Steve never came to a story meeting at Pixar. It was actually amazing, but it was the agreement. He trusted people with things he didn’t know.”

Many agree that after Jobs’ was kicked out of Apple by his Board of Directors in 1985 he mellowed somewhat and the lessons learned at Next also changed him for the better.

According to Ellison, being kicked out of the company he founded was a big surprise to Jobs’. Ellison noted: “He made himself vulnerable. He didn’t negotiate with his board well enough. He expected the board to know that he was irreplaceable.”

His fiery personality is one reason why Jobs was fired (although officially he decided to leave the company). Ellison thinks things would be different today, and that’s probably because with hindsight firing Jobs “almost cost Apple its existence”, in Ellison’s words. “The Apple board didn’t like the way he behaved. But look at the young geniuses in Silicon Valley now. If they don’t like their boards, they fire them. To some degree I think that’s a result of Steve,” he added.

Ellison clarified: “Entrepreneurs don’t trust their boards anymore. Larry and Sergei can fire their boards. Zuckerberg can. Firing Steve was such an incredible mistake.”

The conversation also touched on Jobs famous black mock turtleneck and jeans: “Steve wore the same thing every day because he didn’t want to think about what he was wearing. Steve didn’t care about the way he dressed,” according to Ellison.

Even Ellison told Steve “that bricks and mortar was dead”, and in response Steve said: “But we’re using glass and steel.”

Ellison joked: “He dragged me to the mockups. I wanted to throw myself out of the car.”

Ellison added: “I didn’t say it was nuts. I did say it was very risky. But utterly brilliant. I never expected there would be as many stores as there are now.”

Catmull agreed that the Apple Stores were “more successful than I thought it would be.”

The discussion really demonstrated that Ellison knew Jobs well. And he had been Jobs friend since the early days of Apple. Even in the early days, Ellison saw that: “He was an extraordinary guy and you could see it at the beginning.”