Apple unveiled several new features for its upcoming OS X Mountain Lion at its WWDC keynote on Monday, including full Facebook integration. However, that integration won’t be making an appearance until autumn, a few months after Mountain Lions July launch.

Apple’s Mountain Lion webpage lists built-in Facebook support as one of the many new features coming to the desktop operating system, but has included a “coming this autumn” banner for the introduction.

iOS 6 is also scheduled for an autumn launch, and it too will include Facebook integration, indicating that the feature could arrive on both Apple’s mobile and desktop operating systems simultaneously.

Facebook integration will allow Mac and iOS users to “share what you’re up to straight from the app you’re in,” describes Apple. “Post photos or links. Add comments and locations. Just sign in once and you’re all set up.” 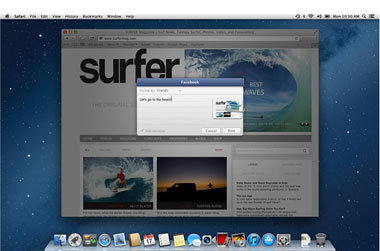 Apple also says that OS X will add Facebook friends, along with their profile pictures, to Contacts, which will be automatically updated with friends edit their information. Facebook notifications will appear in the Mountain Lion’s Notification Center, allowing users to update their status straight from there.

Mountain Lion will be available from the Mac App Store in July for £13.99.

RELATED: Apple’s Facebook integration a boon for both, analysts say