Filming of the upcoming jOBS biopic has begun at Steve Jobs’ old garage where he built the Apple computer with Apple co-founder Steve Wozniak. Photos of the movie’s actors getting into their roles have emerged from the film set.

Photos of Ashton Kutcher, who stars as Jobs in the independent film, were snapped by Pacific Coast News at Jobs’ old Los Altos home, showing the Two and a Half Men star wearing 80s clothing and sporting a beard. Also spotted was Josh Gad, who plays Wozniak.

Kutcher was previously spotted wearing Jobs’ trademark outfit of a black turtleneck, jeans and trainers on his way to the set of jOBS. 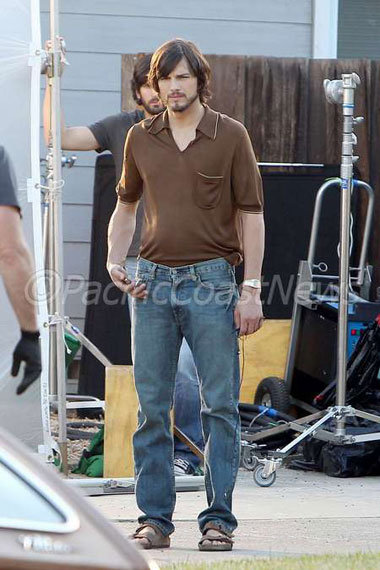 The biopic will focus on the early years of Apple, from 1971 to 200, and is set to be released later this year.

The independent movie should not be confused with Sony Picture’s movie adaptation of Walter Isaacson’s Steve Jobs biography, which screenwriter Aaron Sorkin has said won’t be a straightforward biography.