iPad and iPhone users have been left fuming after downloading misleading apps from the iTunes App Store with the belief that they were purchasing Microsoft Word and Excel for iOS.

Rumours have surfaced suggesting that Microsoft could be working on Office for iPad, but there is no official Word, PowerPoint or Excel app for iOS from the company yet, so don’t be fooled by a the £14 apps that have made their way onto Apple’s App Store.

The apps are, in fact, just tutorials that have been collected from YouTube about how to use Word, Excel and CorelDRAW on a PC, and don’t contain the software itself. EduSoft does note: “This is not the app from the Microsoft,” but this can only be seen if you click on the ‘more’ button beneath the iTunes description. 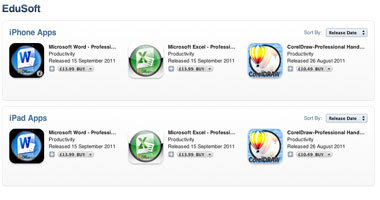 The apps are littered with one star reviews, some asking how the app made it through Apple’s strict approval system, and calling the app a con.

“This is only a tutorial, it is NOT a Word programme!” says one iTunes review. “Total waste of money and an appalling con being allowed to exist by Apple!”

We received an email from an angry reader about the apps today, who said that he had purchased the app after seeing the logo without taking a closer look at the logo. The app is still fooling people, so we thought it best to warn other potential victims.