Apple co-founder Steve Wozniak has met with the founder of MegaUpload, who is currently under house arrest.

The hoasting site founder Kim DotCom is accused by the United States of allegedly running a criminal enterprise responsible for online piracy of numerous types of copyrighted works.

In a Twitter post following the meeting, DotCom thanked Woz tweeting via his @ KimDotcom account: “MegaWoz. Great guy & supporter of EFF. EFF is helping to give Mega users their files back. Thanks Woz & EFF.”

DotCom also posted an instagram picture of himself and Wozniak. 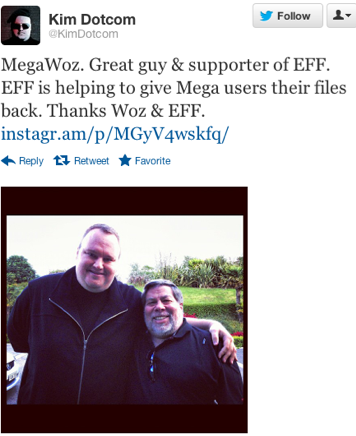 Speaking to TorrentFreak following the meeting, DotCom said: “Woz came to see me at my house when I was still on house arrest. He is such a great legend and totally supportive.”

Megaupload was shut down under copyright infringement charges by the United States Department of Justice in January, and the same month New Zealand Police placed Dotcom under house arrest. Dotcom is awaiting a decision on whether he will be extradited to the US to face charges including criminal copyright infringement. However, that didn’t stop Wozniak from paying him a visit.