A video of Steve Wozniak, co-founder of Apple, discussing the Mac at a Mac User Group back in 1984 has emerged. The video is almost 2 hours long during which time Woz talks about how Apple and the technology behind the Mac, interspersed with stories about his ‘pranks’ and other adventures he shared with Apple’s other co-founder, Steve Jobs.

There are lots of gimpses into Steve Jobs personality at that time. “Creative abilities are allowed to flourish by Steve Jobs’ approach, by seeking excellence in the products he is after. As long as it’s his creation he believes it’s excellent,” jokes Woz. 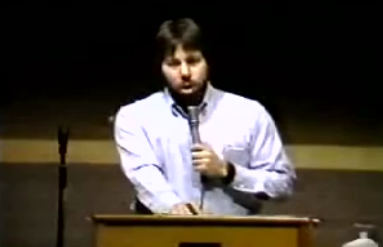 Woz talks about how he got into electronics and computing. “Our parents were mostly engineers”, he says, discussing why he was well placed to gain a love of computing due to living in the Silicon Valley area.

Woz tells the story of the joke line he set up. How he rented an answering machine for $40 a month: “in 1972 that was pretty expensive”. Woz recorded a new joke every morning: “Usually it was a Polish joke, all this problem about people are sensitive or what not, Polish jokes were real big back then,” he joked.

There’s also a great story about when he and Jobs first visited Chicago, and arriving in the airport were greeted by a hari christner trying to sell them a book. Woz thought that they had refused to pay but when they got back to the hotel he saw the book on Jobs’ bed.

Woz describes the Apple II, suggesting that it: “Set a standard for a size and appearance, and a look… You got all these things that are identified with personal computers.”

Woz discusses the pranks they played at the Westcost Computer Show where they first showed off the Apple II – creating brochures for the Zaltare computer. “We decided we can’t even let Steve Jobs know we’re doing this”, Woz reveals.

The video is available here, via TUAW.