Speculation about Apple’s plans to launch a smaller iPad doesn’t seem to be slowing down. New reports have emerged this week that suggest the iPad mini will hit the shelves before the year is out.

This latest report comes from Bloomberg, which says “two people with knowledge of the plans” have claimed that Apple will unveil a smaller, cheaper iPad by October in order to compete with Amazon, Google and Microsoft’s new tablet devices.

There are no specifics about the screen size of Apple’s rumoured tablet in the report, but Bloomberg estimates that it will be between seven and eight inches diagonally, significantly smaller than the current 9.7in iPad models. The anonymous sources did say, however, that it wouldn’t have the third-generation’s Retina display, but will have the same amount of pixels as the second-generation iPad.

Shaw Wu, an analyst at Sterne Agee & Leach Inc said that the price point of Apple’s new tablet will likely be around £160, roughly in the same range as Google’s new Nexus 7 tablet. 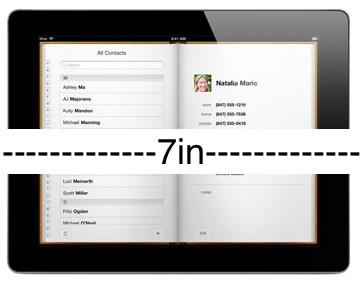 The launch of an iPad mini would be “the competitors’ worst nightmare,” said Wu in an interview. “The ball is in Apple’s court.”

Ovum Ltd analyst Jan Dawson explained that competitors have aimed for areas that Apple has not yet dominated. Microsoft has aimed its Surface at users who want to continue using Windows software (perhaps the reason the company hasn’t brought its Office suite to iOS).

The Google Nexus 7 is smaller, with a 7in display, and aims at a similar market to Amazon’s Kindle Fire.

But the huge volume of apps available on the iTunes App Store could help users make the decision to choose a cheaper iPad over competing devices.

The rumours of a 7in iPad continue to be viewed with some scepticism, however, as the late Apple co-founder, Steve Jobs, dismissed the idea: “The 10in screen size is the minimum size required to create great tablet apps. 7in tablets are tweeners: too big to compete with a smartphone, and too small to compete with an iPad,” back in October 2010.

Microsoft founder Bill Gates believes that Apple may need to make a Surface-like device in the future, but is very excited about Microsoft’s new tablet, he said in an interview this week.