Apple has been granted a patent for a head-mounted display, which could be used to make a Google Project Glass rival.

The patent, spotted by Wired on Tuesday, was originally filed by Apple in 2006, and is titled “Peripheral treatment for head-mounted displays”. It describes apparatus that could project an image in a head-mounted device for the user to view.

“This invention relates to displaying images in a head-mounted display,” reads Apple’s patent description. “A head-mounted display (HMD) is a display device that a person wears on the head in order to have video information directly displayed in front of the eyes.”

This could be achieved by embedding one or two small displays in a helmet, glasses or a visor, says Apple. With two displays, the HMD could show 3D stereoscopic images. It could also use reflective mirrors to create augmented reality, in which a see-through image is imposed on a real world view, Apple’s patent describes. 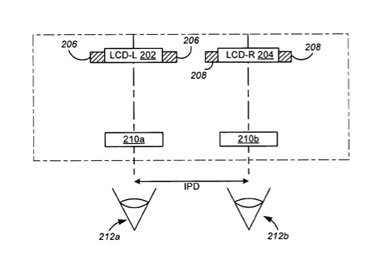 Apple explains that augmented reality could be a benefit to surgeons, military, police, fire fighters, engineers and scientists, for example. It could also be used by consumers for gaming and entertainment purposes.

Apple’s head-mounted display would be adjustable to ensure comfortable and effective use, and peripheral vision techniques could be used to prevent motion sickness.

Wired points out that Apple’s HMD patent is broad, which could prove to be a benefit over Google’s patent for its Google Project Glass, which is specific to the device it has created. However, Apple may decide not to use the patent to create a new device, but instead to prevent its competitors from doing so.

Google first demonstrated its Project Glass heads-up display glasses in April, and allowed select developers to pre-order advanced prototypes of the device last month, which will be shipped in early 2013. Google claims that the glasses will be available to consumers in 2014.