Apple now sells one device for every two Windows devices, revealing that Microsoft’s huge advantage in the platform wars has rapidly decreased since the early 2000s, when the ratio was 56 Windows devices to every one Apple device.

Asymco has published a report that shows that, when taking into consideration all of the devices Apple sells, the ratio of the multiple of Windows units to Apple units has dropped to below two.

The growth of the Mac is also apparent in the new report, which reveals that even when only taking OS X devices into consideration, Windows sells 19 units for every unit Apple sells, a much better result than the 56:1 ratio recorded in 2004.

“Although PC volumes continued to grow, they did so more slowly and the Mac grew faster,” said Asymco’s Horace Dediu when referring to the change that began to emerge from 2004. “What coincided with this was the emergence of portable computing.” 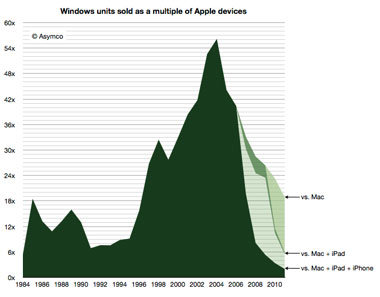 “If we consider all the devices Apple sells, the whittling down becomes even more significant and the multiple drops to below 2,” Dediu continued. “Seen this way, Post-PC devices wiped out of leverage faster than it was originally built. They not only reversed the advantages but cancelled it altogether.”

“Considering the near future, it’s safe to expect a “parity” of iOS+OS X vs. Windows within one or two years,” Dediu concludes. “The consequences are dire for Microsoft. The wiping out of any platform advantage around Windows will render it vulnerable to direct competition… It will, most importantly, have a psychological effect. Realising that Windows is not a hegemony will unleash market forces that nobody can predict.”