Mike Daisey has revised his “The Agony and Ecstasy of Steve Jobs” monologue, and has invited media critics to be part of the audience, it has been reported.

The Washington Post’s Erik Wemple claims that Daisey, who earlier this year accused Apple of ill-treating its factory workers through his one-man show “Mr. Daisey and the Apple Factory,” and was later forced to admit he had fabricated some of his reports, has sent personal messages to media critics including Wemple himself and Reuters’ Jack Shafer, inviting them to watch the show.

“Daisey tells me that he has reached out to about 10 such pundits, noting that he checks out “journalism and media blogs voraciously,”” writes Wemple. “It all smells like an attempt to put media critics on a firing line, the better to blast them in the front of a rapt audience.”

When This American Life retracted its podcast featuring Daisey’s report, Daisey wrote in his blog: “I stand by my work. My show is a theatrical piece whose goal is to create a human connection between our gorgeous devices and the brutal circumstances from which they emerge.” 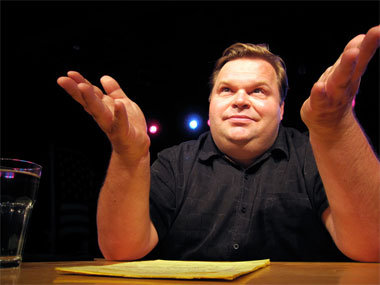 “It uses a combination of fact, memoir, and dramatic license to tell its story, and I believe it does so with integrity” Daisey argued. “Certainly, the comprehensive investigations undertaken by The New York Times and a number of labor rights groups to document conditions in electronics manufacturing would seem to bear this out.”

In May, Daisey also started a Twitter spat with the journalists who interviewed Tim Cook at the D10 conference, suggesting that they should have asked Apple’s CEO: “Recently you went to China for the first time as CEO to tour Foxconn’s production lines. Apple’s first outside audits of Foxconn happened in 2006, after media coverage back then, and the report recommendations made six years ago are the same as the ones made by FLA in 2012. Did it not seem important enough a priority for the CEO until now, six years later? Why did it take so long?”