The news that Apple has volantarily withdrawn from EPEAT (the system used by US government organisations to help base purchasing decisions based on environmental impact) is raising more than a few eyebrows inside the tech industry.

Especially given that Apple’s hometown, San Francisco, has been the first to respond by stating it will no longer be approving the purchase of Apple laptops and desktops with municipal funds.

The move is surprising because Apple has long touted its environmental credentials: Apple products are largely made of highly recyclable materials such as aluminium and glass; are BFR-free and mercury-free, and general operate on low levels of energy, and Apple itself is a big user of recycled paper for its packaging and iTunes cards.

Indeed a site at Apple outlines its achievements in this area, and they’re neither small or insubstantial. The company is often held as standard bearer for other electronic companies to aspire to.

So why has Apple made this move? It didn’t have to withdraw from EPEAT, and there seems to be no material gain other than losing a few key customers. Apple spokesperson Kristin Huguet today released the following statement to The Loop:

“Apple takes a comprehensive approach to measuring our environmental impact and all of our products meet the strictest energy efficiency standards backed by the US government, Energy Star 5.2. We also lead the industry by reporting each product’s greenhouse gas emissions on our website, and Apple products are superior in other important environmental areas not measured by EPEAT, such as removal of toxic materials.”

It’s that final part the “removal of toxic materials” that seems to be the sticking point. EPEAT isn’t just concerned with the materials a device is built with, or the conditions that it is built in, but how easy it is to break down and recycle. We assume either to be put into component parts for spares or melted down and turned into new devices.

And it’s in this area that Apple seems to be falling behind. Apple’s computers have never been particularly easy to get into, strip apart, and replace. Even Apple’s most accessible computer, the Mac Pro ( click here for our Mac Pro review) is far less modular than many other computers on the market.

And other products such as the iMac, and Mac mini offer even fewer choices for upgrades. You can’t remove and upgrade the graphics card, or insert new sound cards, for example. In fact, your options are limited to installing extra memory (typically easy) and perhaps upgrading the hard drive (typically difficult).

Of course, you can argue (and we often do) that this focus produces a small selection of products that always work in a uniform manner: the software is designed to work on the machine as it is sold, and the lack of internal messing around by customers keeps everything in line. Compared to the fragmentation of the Windows-based PC market (which is also showing in the Android market) it’s one reason why Apple Macs work so much better than other computers.

Apple goes out of its way to build devices that are difficult to strip apart, and its latest laptop: the MacBook Pro with Retina Display continues along this path. There is practically no internal upgrade that can be performed on the MacBook Pro with Retina Display. Everything from the chipset, to the graphics, to the RAM, to the Flash memory is welded together and guarded by Apple Propriety pentalobe screws. 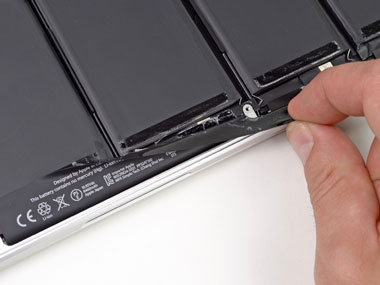 The key problem here seems to be the battery. Apple teardown experts iFixIt.com upon taking apart the MacBook Pro Retina Display said “Great news. The battery is no longer screwed into the machine. Horrible news. Apple chose to use the dreaded g-word. Glue!”

iFixIt.com gave the MacBook Pro Retina Display just 1 out of 10 for repairability, with the following notes:

And that seems to be the sticking point for EPEAT, which places high regard on being able to strip down devices and recycle them at the end of their use. And the MacBook Air Retina Display points to the future of the MacBook range in general (Apple typically works technology from its Pro range down to the rest of the MacBook range). So maybe Apple decided to jump ship before it was pushed.

The deeper argument of whether Apple is right to produce devices that are so hermetically sealed will rage on. After all, it may be tricky for individuals to strip apart the MacBook Pro and add replacement hardware and upgrade features, but that’s a design and personal shopping decision. You get a computer that’s faster, lighter, smaller and arguably more reliable; you lose the ability to upgrade the internal RAM and hard drive.

General consumers may find it difficult to break apart and upgrade the new MacBook Pro, but how difficult can it be for a professional environmental recycling company looking to strip apart a product and melt it down to dissassemble the MacBook Pro? Surely it can’t be that hard to turn it back into sheets of glass, aluminium, and copper wiring?