Tim Cook made a surprise appearance at a Sun Valley media event on Wednesday, leading to speculation that Apple could be aiming to strike entertainment deals for its rumoured Apple ‘iTV’ HD television during the conference.

The Apple CEO was spotted visiting the Allen & Co. annual retreat in Idaho for the first time. Late Apple co-founder Steve Jobs attended the event during his career, but hadn’t done so in several years. The investment firm’s Sun Valley Conference has been an annual event for 29 years, and brings together some of the most powerful names in media and technology for one week during July.

Cook sat in on the “Iran vs. Israel” session at the retreat. Following the session, Cook discretely made his exit in the opposite direction to other attendees, but The New York Post reports that he stopped for a ‘quick chat’ with the publication.

When The Post asked if Cook was at the retreat in order to speak with entertainment executive to strike a deal, he didn’t deny it: “We are talking to a lot of people here.” 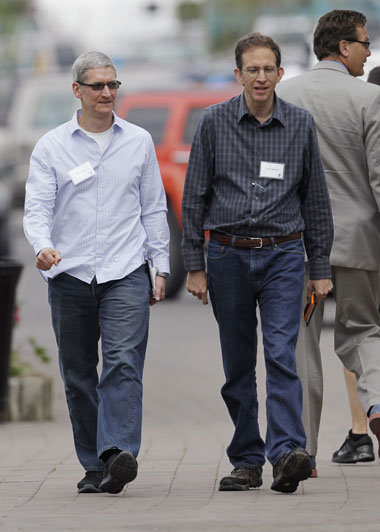 The Post probed further on the subject by asking whether these deals would relate to the speculated Apple HDTV, to which Cook answered: “I can’t tell you that.”

Business Insider also spotted Cook at the event while he was walking alongside Paul Sagan, the CEO of Akamai. Cook appears to be carrying an iPad in the photograph.