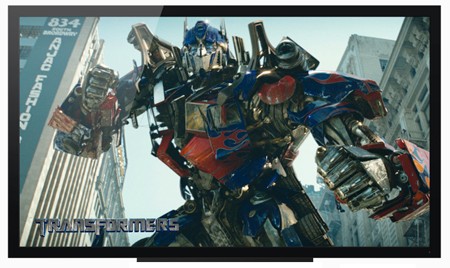 There’s a lot of rumours about the Apple television, and it does seem likely that Apple is gearing up to bring a television to market.

The problem for many people (tech pundits and customers alike) is envisioning how much an Apple TV would cost, and what it could probably bring to market that would convince people en-masse to throw out their current screens.

The common assumption is that Apple is working on a traditional television screen with some super-duper features. Let’s guess that it’s a minimum 40in, possibly with a 3D screen, perhaps retina display to screen 4K movies like the upcoming Hobbit film, with built in Apple TV services (iTunes, Netflix, and so on) controlled by Siri and perhaps interacting with the iPad, iPhone, or some other custom Apple touchscreen remote.

See also: Apple television may be just a transparent screen that you cn fix to the wall in every room of your house

Pricewise we could be talking around anywhere from $1,500 upwards (finger in the air pricing, nobody has any idea what Apple will deliver).

This type of device may well be what Apple brings to the party. The problem we have is that few people on the Macworld team can envision such a device being successful. It’s just not different enough.

A really interesting article has appeared on Businessweek that outlined research by NDS, an Israeli-based TV provider recently purchased by Cisco systems for $5 billion. They have envisioned a future for the television that is almost completely different to the one we have today. In a new and exciting way that sounds, almost Apple-esque to us. Here are some of the highlights:

The next-generation television will be modular…

Forget the 40in screen. NDS’ idea of the next-generation television is more like purchasing individual tiles and slotting them together on your wall. The screens could be 6-8in squares (without bezels) so they can be paired together and expanded into a screen that suits your size. You make it bigger by slotting together new smaller screens (cheaper than buying a whole new display). These can be as big as you like (all the way up to the size of a wall) and placed all over the house.

We should also note that Apple recently had a patent for the Retina Display approved that explicitly discuses minimising edge discolouration.

And there’s plenty of rumours that Apple is working on edge-to-edge screens. Which we have assumed will be for the iPhone 5, but could just as easily be for the Apple iPad/television. 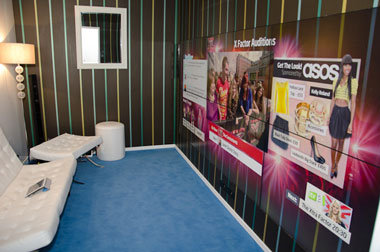 The great thing about this idea is that it solves the problem of cost. You can start with a small Apple screen on your wall, that does a few neat features (shows pictures, video, general information) and keep adding screens to create a bigger wall device that can show movies in ultra-high definition.

Also, you’re not buying a television any more, but buying a new type of device to put on your wall, which offers new functionality that compliments your iPad, iPhone, laptop, and television, This means you don’t need to throw out your current television; which is a great move because it makes you more likely to buy Apple’s device in the first place (because you don’t feel like you’re spending a lot of money to replace something that already cost a lot of money).

We keep hearing that Apple is working on a 7in display device, which may be a smaller and cheaper iPad. But it could also be the television, or both: a bezelless 7in iPad device that can also be wall mounted and act in concert with other similar devices to form a television-style display. Is that ‘different’ enough for you?

And at some point in the future you may no longer need a television, just as many people can now envisage not needing a laptop. But at the start you’ll still have both.

From a business level it makes sense too. The smaller screens cost less to ship around and store than giant television boxes, and would probably have a higher profit margin. It also enables Apple to enter this market without having to forge as many deals with cable companies who are terrified of Apple disrupting the market; it’s more Trojan horse than an outright attack.

The next-generation TV will be ambient…

It’s not so much about purely displaying television shows, or even being capable of streaming them, but about displaying different types of content at once, and in different sizes. You might want to watch the news in a smallish screen, and the latest feature film across the whole wall.

The rest of the display could be like electronic wallpaper, matching the colour of a wall. Or it could display widgets of information (weather, clock, notifications, and so on).

So who can you imagine putting together this type of device? Sony, Samsung, or Apple. One of those companies understands ambience like no other, and has widgets, and a whole ecosystem geared up to deliver information.

According to NDS the television of the future will need new forms of interaction but that’s the bit they still aren’t sure about. Nick Thexton, NDS chief technology officer, told Businessweek that “the company had evaluated Kinect-like gesture control as well as Siri-like voice control but eventually abandoned both because they seemed to require too much effort and were too prone to errors. In the end, he said, people didn’t want to control their TV in a Minority Report-like fashion but with something that feels more natural. “We don’t want people to feel weird in their living room,” he said.”

So we all have our doubts, but we do still think Apple is gearing up to introduce a TV. There are lots of titbits, such as the Mountain Lion patent incorporating television, and then there’s always the Steve Jobs comment in Walter Issacson’s biography:

“‘I’d like to create an integrated television set that is completely easy to use,’ he told me. ‘It would be seamlessly synced with all of your devices and with iCloud.’ No longer would users have to fiddle with complex remotes for DVD players and cable channels. ‘It will have the simplest user interface you could imagine. I finally cracked it.’”

What is this new interface? That’s the rub, we suppose. The truth is nobody has any idea: it could be a combination of touch-screen, iOS device, Siri, and perhaps Kinnect style arm waving. Or something completely different.

We like the idea of a smaller modular television made out of 7in iPad displays, even if it is pure conjecture. Sure, the conventional idea of a 40in Apple television sounds way better than the TVs we currently own, but it’s more money than we’d like to spend on a new model, and won’t really deliver much more than our current television (will Grand Designs or Breaking Bad really look that much better on an Apple TV?) Also we’ve yet to be convinced that Siri is competent enough to be the main form of interaction. This smaller moduler screen idea that’s a new type of device designed to eventually become a larger wall screen that develops over time sounds much more interesting to us.

Most of the tech market had massive doubts about Apple’s ability to deliver a good enough mobile phone device prior to the iPhone bombshell. If Apple can completely change the mobile phone market, can they change the TV market too? With their recent track record you wouldn’t bet against them. But it’d have to be completely different, right?