Apple on Tuesday was granted 25 patents that encompass almost all user interface elements used by modern smartphones. Everything from e-mail, telephone, camera, video player, photos, search, and most importantly multi-touch (the system of using multiple finger gestures on a touch screen display) have all been granted to the Cupertino-based company.

The company, responsible for the original iPhone, as well as subsequent iPod touch and iPad devices, now has the legal right to object to almost every aspect of rival mobile devices, particularly the Android operating system developed by Google.

Patent no 8,223,134: “Portable electronic device, method, and graphical user interface for displaying electronic lists and documents” covers all of the interface elements Apple developed during the original iPhone. 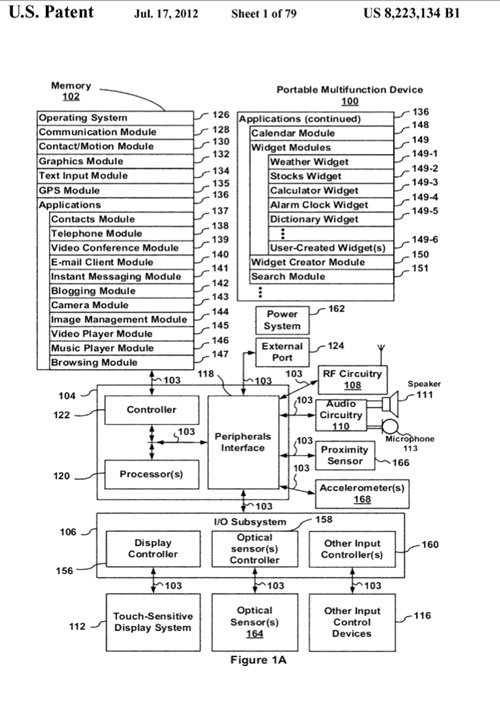 The patent outlines the interaction between harware and various apps including Contacts, Telephone, Browsing and Widgets such as Stocks and Weather

Steve Jobs, former Apple CEO, may finally get his wish and see Android devices (in their current shape and form) completely taken off the market. That is, if Apple’s legal team can make good on the patent system.

Jobs said with his characteristic abrasiveness: “I will spend my last dying breath if I need to, and I will spend every penny of Apple’s $40 billion in the bank, to right this wrong… I’m going to destroy Android, because it’s a stolen product. I’m willing to go thermonuclear war on this.”

Tim Cook, Apple’s CEO, has a softer approach, but the message is similar: “From our point of view, it’s important that Apple not be the developer for the world. We can’t take all of our energy and all of our care and finish the painting, then have someone else put their name on it”. 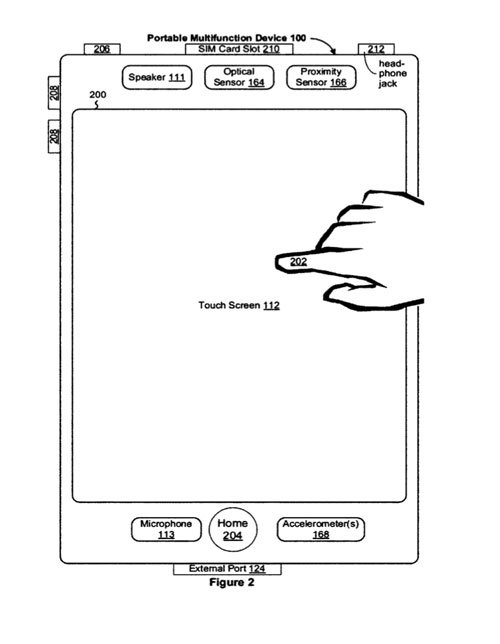 The patent outlines the Multitouch interface and covers all gestures such as pinch to zoom and swipe to unlock.

What effect this batch of patents has is as much a test of the patent system, as it is of the relationship between Apple and its competitors in the tech market. The US Patent department itself is under intense scrutiny after a sharp increase in the number, and veracity, of litigation of patent holders using the legal system to prevent rival devices from going on sale, or extract licensing payments.

As US Judge recently dismissed an Apple patent lawsuit against Motorola “with prejudice” meaning that Apple could not refile, or sue again (thanks to @FloridaLegal for the clarification). Judge Richard Posner described the case as “silly”. Meanwhile, it is reported today that a UK judge has ordered Apple to take out adverts in major UK newspapers pointing to a court ruling that stated “Samsung did not copy its iPad”.

Apple has had success with its patents though, managing to get both the Samsung Galaxy Tab 10.1 and Galaxy Nexus removed from sale in the UK, and has sent letters to UK retailers ordering them to stop selling the device.

Apple is by far the most prolific instigator of lawsuits using the patent system, a report in July outlined that the company was responsible for 60% of mobile patent lawsuits taking place.

There’s little doubt to our minds that rival smartphone makers copied the iOS interface. Apple put all the initial legwork into crafting an end-to-end mobile device that acted as inspiration to the rest of the market.

What seems to be at stake is how much tech companies are allowed to take ideas developed by rivals, and what the role of the patent system is in allowing, or preventing such influence. Steve Jobs himself said “good artists copy, great artists steal”.

Apple has been accused of copying other products, one example would be the Sherlock 3 search system in Mac OS X, which Karelia Software claimed was a copy of its own program Watson.

But if Apple does continue its pattern of using the patent system to block rival products at the point of sale – and there’s no reason to imagine why it wouldn’t – this could give Apple’s legal team a large nail to hammer into Android’s coffin.