Mountain Lion, the latest operating system for the Mac, is expected to arrive shortly. If you’re the sort of person who needs a definitive date, then all estimates suggest that Apple will go with the same schedule as the release of Lion last year, and unveil Mountain Lion to the world the day after its quarterly earnings call this Tuesday. To put it simply, the new upgrade should be revealed and available to purchase from the Mac App Store on Wednesday 25 July.

If you have bought a Mac or MacBook recently then you won’t miss out on the new system and have to fork out again to stay up to date. Apple is giving away OS X Mountain Lion completely free to anyone who has bought a new computer or laptop in the past few weeks.

To be eligible for the free upgrade you must have bought your new device after 11 June 2012, the day when the new Retina MacBook Pro, MacBook Air and 2012 MacBook Pro were released and go to this page within 30 days of the release of Mountain Lion to claim your free copy.

Similarly, if you’re planning to purchase a Mac after the release of Mountain Lion then you have 30 days from the date of purchase to make your Up-To-Date request. 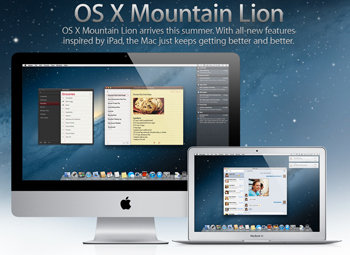 If you are one of the unlucky ones that don’t fall into the eligible category, OS X Mountain Lion will be available to purchase from the Mac App Store for just £13.99.

Undoubtedly most Mac users will put their trust into Apple and purchase or claim the new system without a second thought. More hesitant customers who are used to and comfortable with the current Lion system may want to look more closely at the features of Mountain Lion and weigh up the pros and cons.

Many will be pleased to hear the popular iOS operating system gets a nod of recognition and some of its features are used in Mountain Lion like iChat, now called Messages, AirPlay Mirroring, Address Book renamed as Contacts and iCal in the form of Calendars. One thing to consider when debating whether to take on the new operating system is that is an internet-based installation and a decent connection will certainly ease the process. A new feature called Gatekeeper – which is a optional control over whether only trusted apps (either those distributed via the App Store or signed by Apple) or all apps can be installed – has the potential to make your Mac more secure.