During Apple’s third quarter earnings report on Tuesday, CEO Tim Cook and CFO Peter Oppenhiemer hinted at future products and spoke about the rumours and speculation that surround the sixth-generation iPhone’s launch.

As suspected, Apple announced a slow down of iPhone sales, and the company believes that this caused by consumers holding out for the widely discussed next iPhone model, which is expected to be unveiled this autumn alongside iOS 6. “iPhone sales continued to be impacted by rumour and speculation about new products,” said Oppenhiemer. “We’re reading some rumours and speculation you are about new iPhone, and we think this has caused some pause in customers purchasing.”

“We try very hard to keep our product roadmap secret and confidential, and we go to extreme activities to do that,” said Cook speaking at the conference last night. “That, however, doesn’t stop people from speculating or wondering.”

“That’s the great thing about this country; people can say what they think,” Cook continued. “I’m not going to spend any energy trying to change that. I’m glad people want the next thing. I’m super happy about it.” 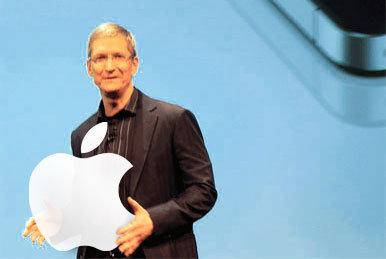 The company, of course, kept quiet about future products, but Oppenheimer did mention that Apple “could not be more confident in our new product pipeline,” and also mentioned a “fall transition”. This transition was brought up in the Q&A after the presentation, to which Oppenhiemer replied “Not something that we’re going to talk about in any level of detail today”.

This transition could be the introduction of a smaller iPad, or the launch of the next iPhone (dubbed iPhone 5). MacRumours points out that the “fall transition” will need to take place before the end of September in order for it to impact the next quarter, which supports yesterday’s rumours about a September iPhone 5, iPad mini, iMac and new iPod touch launch. Apple also said that it expects a year-over-year increase in Mac, iPad and iPhone sales in September, adding evidence to the September launch estimates.

Cook, however, refused to comment about Apple’s future devices, and when questioned about upcoming products he replied with just a chuckle.

Also announced at the earnings results last night was that Apple’s new operating system, Mountain Lion, will be made available today.