With the launch of Mountain Lion comes the arrival of Dictation on the Mac. The new feature can convert speech to text within many applications. However, users are concerned about their privacy when using Dictation, as it can send personal data, including Contacts, to Apple’s server.

Apple has made sure that users are aware of the privacy issues relating to Dictation. Before enabling the feature for the first time, Apple notes: “When you dictate text, what you say is sent to Apple to be converted to text. To help your Mac recognize what you’re saying, other information is sent as well, such as your contacts.”

Further information about privacy when using Dictation can be found by clicking the “About Dictation & Privacy” button, which appears when enabling the feature. The explanation reads:

“When you use the keyboard dictation feature on your computer, the things you dictate will be recorded and sent to Apple to convert what you say into text. Your computer will also send Apple other information, such as your first name and nickname; and the names, nicknames, and relationship with you (for example “my dad”) of your address book contacts. All of this data will be used to help the dictation feature understand you better and recognize what you day. Your User Data is not linked to other data that Apple may have from your use of other Apple services.” 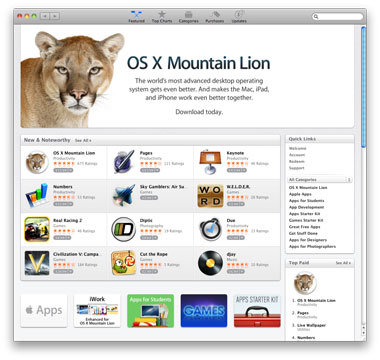 “Information collected by Apple will be treated in accordance with Apple’s Privacy Policy, which can be found at www.apple.com/privacy,” the explanation continues.

Apple says that users can choose to turn off Dictation at any time, but older voice input data that has been disassociated from you may be retained for a period of time to improve Dictation and other Apple products and services. “This data may include audio files and transcripts of what you said and related diagnostic data, such as hardware and operating system specifications and performance statistics,” the explanation concludes.

Users have taken to Twitter to complain about their privacy concerns about using Dictation, but before we managed to grab the tweets to use as quotes here, the social networking site went down. So, we’ll update this story when Twitter is back up and running to bring you comments from worried Mountain Lion users. You can also tell us your thoughts about the issue in our comments section below.

Users have noticed a positive in the Dictation feature, though. Apple has demonstrated its attention to detail by programming Dictation to temporarily disable the MacBook’s fan so it can hear the user better.

Mountain Lion was released on Wednesday, causing broadband operators to see a huge spike in traffic in the hours following the launch.