Apple has released a new series of Mac ads that have been deemed ‘embarrassing’, ‘cheap’, ‘cringe-inducing’, and ‘dreadful’.

The three new adverts were broadcast in the US during the Olympics Opening Ceremony on Friday, and feature an Apple Genius helping various Mac owners in unlikely situations.

But, unlike many of Apple’s previous ad campaigns such as the Think Different campaign and the Get a Mac series, the new ads have been widely criticised.

The Verge calls the adverts “intellectually cheap,” and says that the unifying theme is “stupidity”. 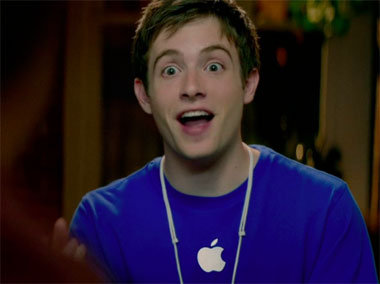 Industry analyst at Gartner, Michael Gartenberg, tweeted: “Just saw the Apple “Genius” ads. Can’t say I loved them. They lacked education, aspiration or humor IMHOP. Needed at least 1 of the 3.”

Fortune reports that the ad featuring the Apple Genius on an aeroplane, helping a Mac owner make an anniversary film for his wife after forgetting the occasion, is the only funny one out of the three.

The other two adverts, which show the Apple Genius answer the door in his uniform at four in the morning to an expectant father, who’s wife is in labour and wants to make cards to send to the family announcing the baby’s birth, and the Apple Genius speaking to a customer who bought a PC that’s “basically” a Mac, are “where the quality falls off” says Fortune.

However, the adverts do have some defenders. Pobregizmo tweeted: “I work for Geek Squad and the people I help every day will eat these ads up,” which was then retweeted by Daring Fireball’s John Gruber.

CNET’s Chris Matyszczyk wrote that Apple’s ads show its customers as “nincompoops,” but does note that “Apple isn’t too worried whether its fanboys love these ads or don’t. The company is trying to bring new, real people into the fold, people who have had their struggles with Windows over the years.”

Craig Hockenberry tweeted: “The people who are complaining the loudest about the new Genius ads already own Apple products. It’s not about you. At all.

The Next Web calls the campaign “Well targeted, poorly executed,” highlighting that the idea behind the ads is smart, aiming for potential new customers by showing that Apple has a team of retail experts available to help should they have trouble getting used to the unfamiliar operating system.

TNW points to John Moltz’s blog, which claims that the message Apple was aiming for with the new campaign was: “If you’re concerned about switching, don’t be. We have these geniuses who make it easier.”

What do you think about Apple’s new adverts? You can watch them all here. Let us know in the comments section below.