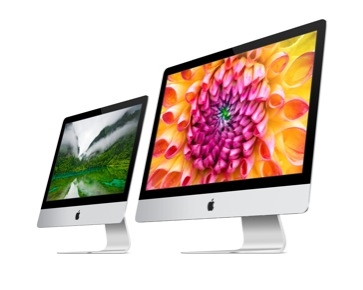 Apple has updated the iMac with fourth-generation Intel Haswell quad-core processors and improved graphics. We’ve got all of the specifications of the new iMac, and also give you a peek inside the new models.

The entry-level iMac is the only one to this integrated graphics processor, while the three other models will offer NVIDIA GeForce GT 750M and 755M graphics. The NVIDIA GeForce 700 series graphics offer twice the video memory and up to 40 percent faster performance than the previous generation, according to Apple.

The new iMacs feature support for PCIe-based flash storage, as seen in this year’s MacBook Air. Apple says this makes Fusion Drive and all-flash storage options up to 50 percent faster than the previous generation. Read our 2013 iMac review.

As with the MacBook Air, we can expect to see great improvements in speed thanks to the new Haswell processors featuring across the range, despite the GHz, in many cases, being no higher than previously.

Also, like the MacBook Air, the new iMac range gains 802.11ac Wi-Fi. Prices are up £50-£100 across the range, with the entry-level 27-inch model seeing the biggest rise – but there is now has a bigger processor gap between it and the 21.5-inch model.

Teardown experts iFixit have taken apart Apple’s new iMac to find out what’s inside. Highlights include the fact that Apple now allows users to put a second hard-drive into both the 21.5in and 27in iMacs via the Fusion Drive SSD port. This means, if you don’t choose to have a Fusion Drive put in when you buy your iMac, you can add one later.

“That port is now PCIe, which should help get drives/adapters onto the market that will enable a second hard drive installation,” iFixit adds.

However, iFixit does point out that smaller new iMac models no longer have upgradeable CPU. “The CPU is now soldered to the logic board, and no longer replaceable by the user,” says iFixit. “As far as we can tell, this is the first aluminium iMac to have a soldered CPU; it’s silent, but clear, shift to even poorer iMac upgradeability. That’s sad news for Apple’s power user community, who appreciated the ability to upgrade their Macs on their own schedule.”

The 27in iMac does have a replaceable CPU, though.

The new iMacs retain the design of last year’s model, the super-thin screen and light weight (5.68kg for the 21.5in model). 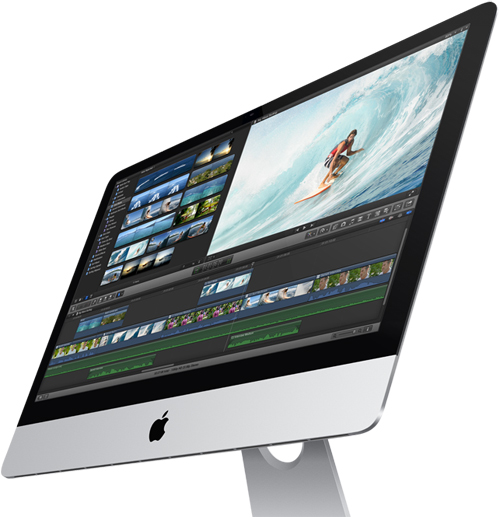 Trying to decide which iMac to buy: READ  Mac Desktop reviews /  Which Mac

The high-end version of the 21.5-inch iMac model feature quad-core Intel Core i5 processors at 2.9GHz (Turbo Boost up to 3.6 GHz). Like the entry-level iMac, it features 8GB RAM (configurable to 16GB), and a 1TB 5400-rpm hard drive (configurable up to a 1TB Fusion Drive or 256GB or 512GB of flash storage). It features the NVIDIA GeForce GT 750M graphics processor with 1GB memory. [Previously a 2.9GHz IvyBridge processor] 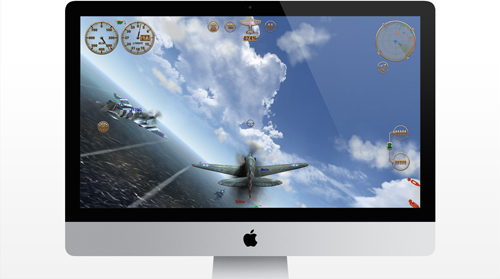 The iMac now supports next generation 802.11ac Wi-Fi. To take advantage of this it needs to be connected to an 802.11ac base station, such as Apple’s Airport Extreme or Time Capsule. Apple claims that the wireless performance is up to three times faster than the previous generation.

The new iMac comes with two Thunderbolt and four USB 3.0 ports for connecting to external storage and other peripherals.

There is also an SDXC card slot and Mini DisplayPort output. There is still no CD drive.

According to Apple, the new iMac is available today through the Apple Online Store and resellers, although currently the Apple Store shows stock to be ‘Currently unavailable’.

Prices are up across the board, with the entry-level 27-inch model gaining £100 on the price. 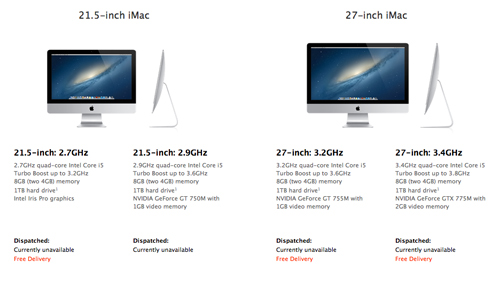 It is possible to upgrade the processor in the flag-ship 27-inch iMac to 3.5GHz for an aditional £190. The graphics on the 3.4GHz iMac can also be upgraded to the NVIDIA GeForce GTX 780M with 4GB memory for £130.