iPad mini component photographs have appeared on the Chinese micro blogging site Sina Weibo showing the shells of the new iPad mini, surprisingly with no hole for a camera lens. Though these photos are gloomy and bad quality, and quite likely to be fake, it could be the closest we’ve come to seeing the iPad mini before its rumoured launch.

Apple is expected to unveil the potential triumph of the iPad mini in the autumn, and as our curiosity grows, the number of rumours about the product correlates.

It is possible that the prototype product has been created by third party manufacturers, who are attempting to capitalize on the anticipation of the release of the iPad mini. It is also feasible that this could be part of Apples prototyping process as it tries to deduce the most efficient way to produce the shell for the new iPad mini, notes iDownloadblog. 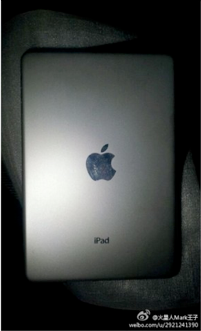 It seems unlikely that Apple would exclude a camera from the final design, as each iPad model (with the exception of the first) has one. However, it is also feasible that Apple is targeting the ebook market, currently dominated by Amazon’s camera-less Kindle, with the new device. If this was the case, the inclusion of a camera on the iPad mini could give Apple a unique selling point that the Kindle and other ebook readers do not have.

Another reason for not including a camera could be a cost saving measure. Apple may be trying to lower the manufacturing price of the iPad mini by removing the camera.

The debate about whether any of the images of Apple’s iPad mini (or for that matter iPhone) that have appeared on the web are legitimate rages on.

Is it possible that the production of the iPad mini has not taken place yet, therefore potentially Apple is like us; in the dark as to what the final iPad mini’s final features will be. Apple may indeed be questioning whether the iPad mini will include a camera at all.

Everything you need to know about the iPad mini – Updated