Apple has been granted a patent for an iWallet application that uses Near Field Communication (NFC) to allow iPhone owners to quickly find bargains.

The US Patent and Trademark Office published the patent on Wednesday, revealing that Apple has come up with an “on-the-go shopping list” application that will allow shoppers to identify a product and get pricing information from different retailers in the detected geographical location, to help users find the cheapest deal.

Patently Apple reports that Apple’s newly granted patent covers an application that will have a variety of features to help enhance shopping lists and speed up the overall shopping experience.

Retailers would be able to distribute relevant product information to targeted consumers through the app. 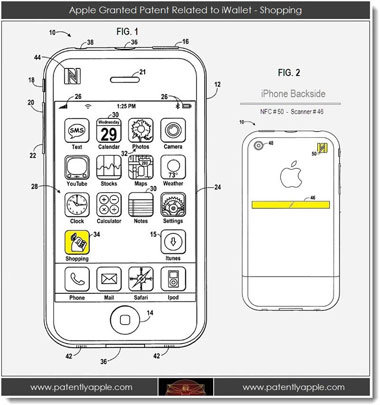 In this patent, NFC is not used to complete the final transaction, as we’ve seen with Google Wallet, but rather to discover bargains within a close range of the iPhone. It has been reported that Apple isn’t yet willing to enable credit card payments via the iPhone due to concerns about the security.

Apple is set to launch iOS 6 in autumn, which will introduce the new Passbook app. Increasingly, when people purchase tickets for events or book into an airport these are sent electronically. Passbook is an attempt to provide an integrated iOS solution that holds all of these in an Apple app. It is thought that Apple could introduce an NFC chip in its iPhone 5, to work with Passbook.

A recent patent application reveals that Apple is interested in using NFC chips to allow an iPhone to act as a remote control for various devices around the home.