Rumour has it that Apple could be working on an asymmetric screw which would lock users out of their devices for good, reports Cult of Mac.

As it is, Apple’s new MacBook Pro with Retina display is probably the least repairable laptop out there, according to repair site iFixit and with the possibility of this next-generation screw, it effectively rules out self-repairing of Apple devices.

Apple currently uses pentalobe screws, a tamper-resistant screw, on its devices. These unusual and rare exterior screws already make it harder for users to take the devices apart and have a tinker with the internals.

Cult of Mac reports that an image of the next-generation asymmetric screws has been posted to Reddit, with the original poster crediting the Apple for the design. 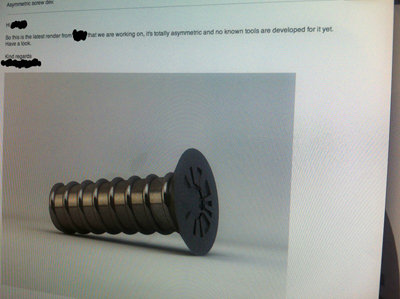 If this rumour is true, it could be a cause for concern as Kyle Wiens from iFixit tells Cult of Mac, “If this were an Apple design, it would be concerning. Service technicians of all kinds need access to hardware.”

Wiens further points out that the threads on the screw seem unrealistic and that a head like that might prove too complex to function as a tool head. He also added that there is a high possibility that this design is not from Apple.

Update: It turns out this rumour was started by Swedish news site Nyheter24 and both the image, and story, are fake.