Apple is in the process of building a new type of Apple Retail store in San Francisco that has incredible internet bandwidth capabilities.

Apple is rumoured to be working on a new type of television, on that blurs the distinciton between live and internet streaming content. Demonstrating hundreds of Apple televisions in a retail environment could require new levels of internet bandwidth.

The prototype store is based right in the heart of Silicon Valley and connected directly to the Palo Alto Internet Exchange (PAIX), one of the most powerful internet access points available. 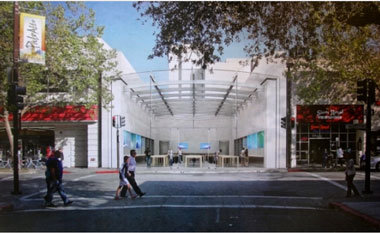 Visuallly the building looks similar to currect Apple stores with prominent use of glass and stone. Apparantly the new store will also include interior trees.

At the time of the architectural review, Palo Alto city officials were convinced Apple would be the store’s ultimate tenant, based on the details of the application. “It was clear, when they said where the sign was going to go and when they talked about the project details, who the tenant would be,” an architectural review board member said, according to Palo Alto Online in 2010. “It was just really obvious.”

The construction firm overseeing the remodel of the site is DPR Construction, which also built Apple’s flagship store in downtown San Francisco.

PAIX is a high security facility that offers tremendous bandwidth for anytobyd who sends and recieves a lot of data. Facebook is a PAIX client. Plans filed with the city of Palo Alto call for a pedestrian tunnel, presumably leading between the Apple store and the telco facilities next to it.