Apple’s app approval policy is once again in the spotlight, as Brooklyn-based app developer Josh Begley’s app Drones+ has been rejected from the App Store.

The app is designed to provide real-time information from reputable news sources about attacks from American drones (unmanned planes typically used perform attacks overseas) and provides push notifications to those who have the app installed. 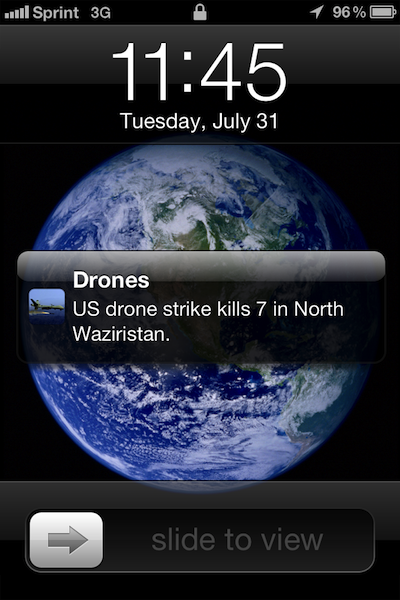 While the app works in a similar manner to other news aggregators (which are manifold on the App Store) it does not offer any detailed information beyond a location and kill count.

Begley revealed that Apple had rejected the app three times. The first rejected claimed that the App was “not useful”, the second rejected regarded the appearance of a corporate logo, on the third rejected Apple stated that the app was “objectionable and crude”. An objection that RT.com noted “could be said of the drone strikes themselves”.

“If the content is found to be objectionable, and it’s literally just an aggregation of news, I don’t know how to change that,” Begley told Wired.

The app itself offers little, if no, comment on the drone strikes other than to provide information and a death count. It could easily be argued that the App could prove as popular with armchair generals and war cheerleaders looking to celebrate each successful strike, as well as people who find unmanned attacks objectionable.

Much of the comment surrounding Apple’s decision to reject Drones+ has focussed on the fact that Apple is once again acting as a morality gatekeeper. Apple’s developer guidelines outline this is some detail, stating: “We view Apps different than books or songs, which we do not curate. If you want to criticise a religion, write a book.” and “We will reject Apps for any content or behavior that we believe is over the line. What line, you ask? Well, as a Supreme Court Justice once said, ‘I’ll know it when I see it’. And we think that you will also know it when you cross it.”

It looks like Josh Begley just became the latest person to cross that line.