The BBC has introduced a new mobile downloads service for its iPlayer app that allows users to download shows onto their iPhone, iPad or iPod touch to watch offline.

Previously, the BBC iPlayer app required users to be connected to the internet via WiFi or 3G in order to stream television shows. With Tuesday’s update, users are now able to download BBC TV programmes onto their device for free, and keep them for up to 30 days to watch at any time. Users are also able to download multiple programmes at once.

“Watch on the underground, on planes, or any location where internet access is beyond your reach,” says the BBC. “Programmes downloaded from the UK can also be viewed abroad for up to 30 days… once you’ve pressed play, you can keep watching for seven more days.”

The BBC has introduced the feature in its iOS app for iPad, iPhone and iPod touch, and says that Android devices will get access to the service “soon,” and that the company is “looking at making downloads available on other devices in the future.” These ‘other devices’ could include games consoles, connected TVs and other mobile operating systems such as Windows Phone.

Read next: How to set up and use the BBC Music app 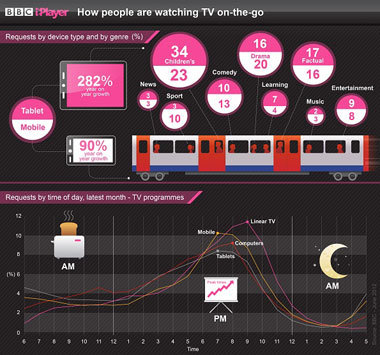 Infographic showing how people are currently watching BBC iPlayer on the go. This could all change with the BBC’s new update that will allow users to watch shows without access to the internet on the tube and without data plan worries. Source: BBC.

You can download the free BBC iPlayer app from the App Store here. Users that have already downloaded version one of the app will be able to install the update from the ‘Updates’ menu on their iOS device’s App Store.