Google has released a dedicated YouTube app for iOS and it is now available for download from the Apple App Store.

As part of its iOS 6 update, Apple has removed several Google apps, including YouTube, and replaced Google Maps with its own dedicated map service. 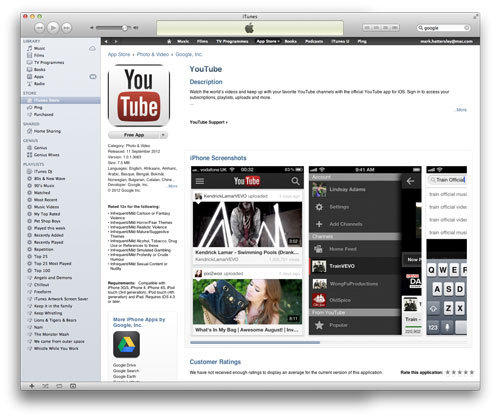 Google had not announced a dedicated YouTube app, but many tech pundits had speculated that it might release a dedicated YouTube app for iPhone. Despite owning the rival Android iPhone operating system Android, Google still produces several key iOS apps including Chrome, Gmail, Google+, and Google Translate.

The app does not have system-wide implementation, as the previous app, and YouTube links in Safari open in the already competent Google YouTube mobile optimised website.

The release prior to iOS 6 comes as a surprise because Apple typically does not allow apps that replace key features of iOS. And YouTube is still part of the iOS 5 operating system. It’s release today lends weight to the belief that Apple is going to release iOS 6 tomorrow alongside the iPhone 5 announcement.

There is no news yet on a dedicated Google Maps app, which would be of more value to iOS owners.