Queuing outside an Apple Store isn’t all about being one of the first to buy an iPhone 5 (or iPad).

Over the years Apple Store queuers have set up camp early with a view to selling their place in the queue, or earning a bit of cash by buying an iPhone for someone.

This year there is a new trend emerging as people queue in order to raise awareness for a cause or money for charity.

Two campers took up their position outside the Covent Garden Apple Store earlier this week and are hoping to raise money for Cancer Research UK. Fundraisers Ryan Williams and Peter King from Kent will auction off one of their iPhone 5s for the charity. They are documenting their iPhone 5 queue experience here. 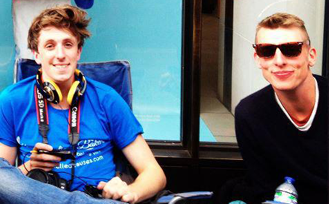 So far the duo have raised more than £262 in donations on the JustGiving website. The iPhone 5 that they will buy is currently going for £621 on eBay. We’ve just sponsored them, how about you?

Outside the Regents Street Apple Store are another two campers hoping to raise money for a good cause.

By Friday, when the iPhone 5 goes on sale, Richard Wheatcroft and George Horne will have spent almost eight days in the queue at the Apple Store in Regent Street. The campers are raising money for Wheatcroft’s Crowd Fuelled Causes, which aims to create sustainable social enterprises with a focus on providing a platform for different groups of people to find paid employment, training and development of skills, according to the website. They are fund raising for the Hope Boutique Bakery.

The Hope Boutique Bakery is described as: “A bakery of talented, dedicated and hardworking women, who have previously been caught in trafficking, prostitution or have been abused, attacked or assaulted at some point in their lives.”

The two entrepreneurs have teamed up with eBay-like Sooqini to sell their spots to the highest bidder. Sooqini is a mobile and online marketplace where anyone can buy and sell anything from goods, skills or information, with others in their local community.

Rob Shoesmith famously camped outside Apple’s Covent Garden Store last year awaiting the launch of the iPhone 4S, even witnessing a robbery on the store in his 10-day stint. Shoesmith has gone on to publish an eBook about his 10-day Apple queue. 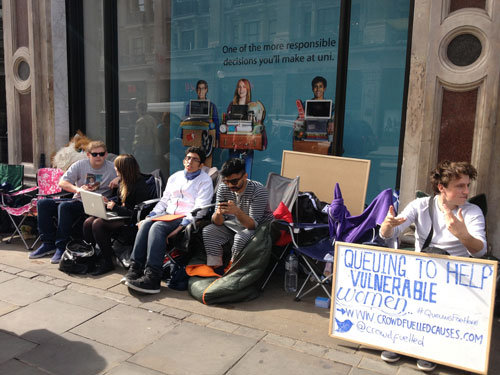