Apple has come under fire around the world for its new maps app that has replaced Google Maps on iPhones and iPads running iOS 6. Now it has emerged that Apple actually ditched Google Maps from the iPhone a year before the contract would have run out, not because of Steve Jobs desire for Thermonuclear War with the company, but because Apple wasn’t happy that the Android version of Google Maps was better than the iOS version.

According to a report on The Verge, Apple decided to stop its partnership with Google at sometime before WWDC in June.

In raction to the news Google is said to have started “Scrambling to develop an iOS Google Maps app”, although earlier this week, Google’s Eric Schmidt revealed that his company “hadn’t done anything yet” with regards to Google Maps on the iPhone and iPad.

The report suggests that Apple turned its back on Google because it felt that Google’s Maps on iOS were not as good as their equivalent on Android. For example, they lacked the turn-by-turn directions that had been available on Android for years. Google also wanted more prominent branding and better terms for their relationship with Apple. 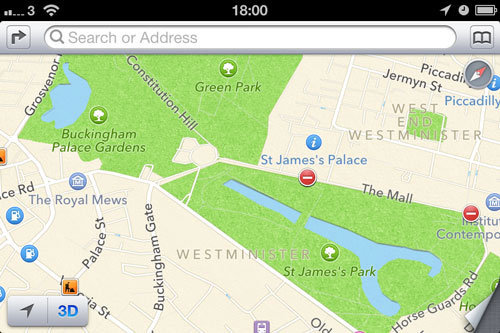 As we reported earlier this week, Apple co-founder Steve Wozniak revealed that he felt iOS 6’s new Maps app, is “disappointing”. In particular he wasn’t happy that he couldn’t navigate by voice. Woz also noted that the Google Maps on Andorid phones are based on a better database.

However, Woz said he doesn’t think that the problems with Maps are as severe as reported. “I’m a little worried about the navigation, but I’ve still got it covered with a bunch of other navigation apps,” he told ZDnet.

Apple Maps a hit in China

In contrast to the rest of the world, Apple’s Maps are said to be a hit in China where they are being praised as a “huge improvement over Google Maps”.

Apple’s Chinese Maps data is provided by AutoNavi Holdings, giving it the edge on the competition.

Elsewhere in the world, Apple’s maps data is provided by TomTom. TomTom provided a statement claiming that its maps data provides only the “foundation” of the Apple’s mapping software, while Apple “create their own unique application, which defines the user experience”.

Another bonus, the iOS Maps shows both English names and Chinese characters for everything, whereas Google-powered Maps only shows the English translation, notes Apple Insider.

Not everything is wonderful though, Chinese users don’t gain spoken turn-by-turn directions of 3D flyover maps that are available in some locations.