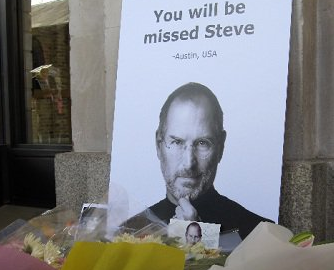 Steve Jobs, Apple’s co-founder and its CEO through a period of record growth and innovation for the company, died exactly one year ago today, on 5 October 2011. He was 56.

Jobs’s death was confirmed by a statement from Apple’s board of directors, in which they described “Steve’s brilliance, passion and energy were the source of countless innovations that enrich and improve all of our lives. The world is immeasurably better because of Steve.”

Jobs’s passing came after a long battle with a rare form of pancreatic cancer that led to him taking a leave of absence from the company on a number of occasions. He resigned as CEO in August 2011, announcing to the world the day had come “when I could no longer meet my duties and expectations as Apple’s CEO.” He was succeeded by then chief operating officer Tim Cook and became Apple’s chairman.

Jobs died of respiratory failure caused by the spread of a metastatic pancreas neuroendocrine tumour, according to his death certificate. 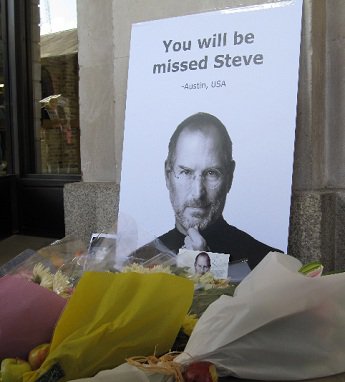 Jobs was survived by his wife Laurene Powell and four children, and his sister, Mona Simpson.

Following the news of his death tributes poured in for Steve Jobs. Stephen Fry, author and comedian: “Woke to the news of Steve Jobs’s death. He changed the world. I knew him a little and admired him entirely. Love to Apple and his family.”

Steve Ballmer, Microsoft CEO: “I want to express my deepest condolences at the passing of Steve Jobs, one of the founders of our industry and a true visionary. My heart goes out to his family, everyone at Apple and everyone who has been touched by his work.”

Former Microsoft CEO Bill Gates said he would miss his onetime rival. “For those of us lucky enough to get to work with Steve, it’s been an insanely great honor,” Gates said on Twitter. “I will miss Steve immensely.”

Tributes pored in from fans around the world, with flowers and memorials being left outside Apple Stores.

A private memorial for Apple employees took place at the company’s campus in Cupertino on 19 October.

Announcing the plans for the memorial, Cook told employees in an email: “Although many of our hearts are still heavy, we are planning a celebration of his life for Apple employees to take time to remember the incredible things Steve achieved in his life and the many ways he made our world a better place.”

The governor of California, Jerry Brown, even decaled that Sunday 16 October 16 would be “Steve Jobs Day” across the US state to coincide with a private memorial for the Apple co-founder at Stanford University. The honour, which was strictly for observance and did not involve a public holiday, is not normally given to corporate figures.

Jobs made a famous speech at Stanford university in which he made the following comments:

“Your work is going to fill a large part of your life, and the only way to be truly satisfied is to do what you believe is great work. And the only way to do great work is to love what you do. If you haven’t found it yet, keep looking. Don’t settle. As with all matters of the heart, you’ll know when you find it. And, like any great relationship, it just gets better and better as the years roll on. So keep looking until you find it. Don’t settle.”

History of Steve Jobs and Apple

Both as the founder of the first successful personal-computer company and as the man who transformed a nearly-bankrupt Apple into one of the most successful companies on the planet, Jobs established himself as an American icon of business and technology.

From founding Apple computers with Steve Wozniak to the launch of the Mac in 1984, even in the early days of Apple, Jobs wrote the future of information technology.

Then, having left the company in 1985 after a power struggle, he eventually returned in 1997 and transformed Apple, which was almost bankrupt, into the company it is today.

The future of Apple

Since Jobs’ death we’ve had the publication of his biography by Walter Isaacson, and news that two films that will document his life are currently in production, one of which will star Aston Kutcher as Jobs, a role that Kutcher says was “meant for him”. That movie, ‘Jobs’ will focus on the Apple CEO’s early years. Yet more information emerged about Jobs in ‘lost interviews’ that were uncovered and then aired as a film.

Jobs stayed very much in the news following his death as stories stemmed from the authorized biography and stories based on anecdotes from that book continue to gain attention months later. Earlier this year we attended a lecture with Jobs biographer Isaacson in which he made many revelations about his time with Jobs, including emphasizing Jobs anger at Google.

In recent weeks there has been a lot of questions about whether under Jobs rule Apple would have made mistakes such as the Apple Maps fiasco. The question of whether Apple can survive without Jobs continues to raise its head. However, Apple’s Tim Cook has been credited with doing great things for the company in his year as CEO, with the share price going from strength to strength, hitting $700 around the time the iPhone 5 was announced, up from $372 around the time Jobs died. Apple continues to make mistakes but perhaps it does so without the same arrogance that it did in Jobs’ day.

Apple without Steve Jobs isn’t the same company as it was, but a year on Jobs is still very much a part of the company and I’m sure the connection will remain for many years to come.