More reports are appearing claiming that Apple’s Maps has features that make it superior to Google’s Maps on iOS 6.

Yesterday we looked into whether it is true that Apple’s Maps are less of a data hog than Google’s Maps. Today we are testing the claim that Apple Maps stores more data for use when you are offline, a handy feature if you are traveling abroad and don’t want to use up your data allowance.

We compared maps of Saint Malo in France, loaded up in an iPhone 4S running iOS 5 and the iPhone 5.

There are definitely differences in the amount of data stored. For example, when we studied the Apple Maps version we could see restaurant, bar and hotel information, Google Maps showed hotels, but little else. (It should be noted that Google had more hotel information than Apple, but then given the lack of specific information in Apple Maps, that is no surprise right now). 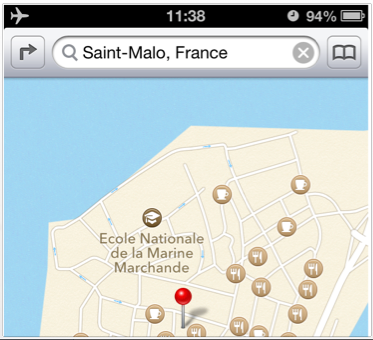 In neither case could we search for road names or routes when the WIFi was off. However, with a bit of preparation, you can drop pins on the locations you plan to visit.

What really surprised us about Apple Maps was that when we switched to Satellite view, the Satellite maps loaded, even in Airplane mode. This doesn’t happen in Google Maps.

Is Apple Maps really less of a data hog than Google Maps?