Apple has filed a patent application for a wireless set of earphones that are aimed at sporty users.

The application, which was published by the US Patent and Trademark Office on Thursday, is titled “Detachable wireless listening device,” and describes a set of earphones that use wireless technology such as Bluetooth to prevent wires from bothering active users while out and about.

In the application, Apple writes that common wired headsets may be cheap and efficient, but they are “susceptible to becoming entangled while the end user is participating in physical activity.”

“This is particularly nettlesome since the cord connected to the personal media player while exercising or worn on the body requires frequent adjustment to avoid entanglement which can prove distracting or in some cases present a hazard to the user.” 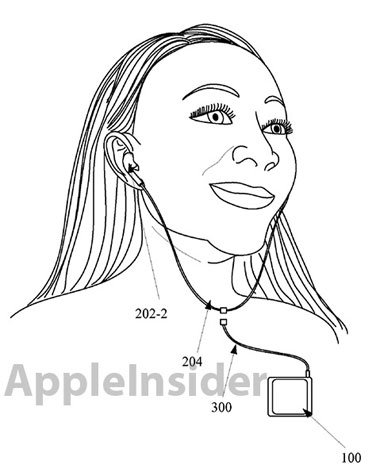 In order to solve this problem, Apple’s invention is a set of earphones that can be used as an ordinary wired pair, and can also be detached to be used wirelessly when desired.

This could be made possible through the use of magnets, which will connect the earbuds to the media player. When attached, the cables will also be able to charge the earbuds for wireless use.

The earbuds can be separated from the cord for wireless use, where the device will send audio via a radio communication or Bluetooth. Stereo audio could still be possible when using the earphones wirelessly, through the use of unique wireless addresses for the left and right earbud.

Apple filed the patent back in March 2011.