Apple’s Passbook app introduced in iOS 6 may come in handy next time you are shopping in an Apple Store. The company is said to be looking to support Passbook as a means of mobile payment in store.

It could work in a way similar to the EasyPay system used by Apple Store employees, except that shoppers will be able to scan their goods and check themselves out without even bothering a member of staff. The payment would be made with the card tied to their iTunes account, suggests Business Insider.

The Passbook location integration could also be used to sign-in to Genius Bar appointments.

Currently it is thought the EasyPay hardware used by Apple Store staff cannot scan iOS device displays. An Apple Store source told TUWA that Apple has been replacing the cases of EasyPay-enabled iPod touches to allow use of the rear-facing camera for scanning items such as a Passbook card – previously the camera was concealed by the case. In addition, a new software update will be soon be released to retail employees that will allow them to capture Apple Store payment card codes from devices running Passbook, according to 9to5 Mac. 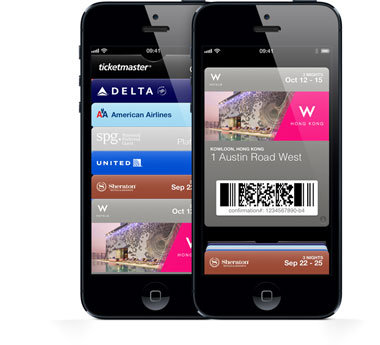 TUWA notes that Apple did tease an EasyPay point-of-sale solution in Passbook when the app was announced, it is also noted that Starbucks has already implemented such a system.

Prior to the launch of the iPhone 5 some had hoped that Apple would include NFC technology in the device. What Apple decided to do instead of NFC is promote its Passbook mobile payment software, which runs on the new iPhone’s iOS 6 mobile operating system.