We recently caught up with Warwick Davis, best known for his roles in Willow, Star Wars, Harry Potter and Life’s Too Short, and appearing in an iPad or iPhone near you soon. He revealed some interesting thoughts about the future of acting in this technological age, and the new ways in which an actor can reach out to their audience thanks to products like the iPad and iPhone.

Warwick, who has been completely immersed in the Pocket Warwick project, which he conceived himself, teamed up with a developer, for whom it is safe to assume this has been a time-consuming but fun project. The developement process itself has been something of a drama but Warwick Davis’ first app, Pocket Warwick, is due to launch next Thursday, days after Apple’s launch of the iPad mini.

The obvious question is why would Warwick Davis want to create an app? Is it intended to generate publicity? Is it a means to make money? The app is free, but players can choose to spend their own cash to progress quickly (we’ve been assured that the game can be completed without parting with a single penny). Rather, this app was conceived out of what Warwick described as an “obvious progression” from theatre, movies and television onto a new platform.

Warwick explained: “It seems to be an obvious progression for me: you have to be prepared to change the way you do things, to look to new things, new ways to express your performance. Actors have to adapt to this whole new way of working – that’s what’s happening now with the gaming industry, where they use performance capture. I think as actors we’ve all got to learn to metamorphose and embrace that.” 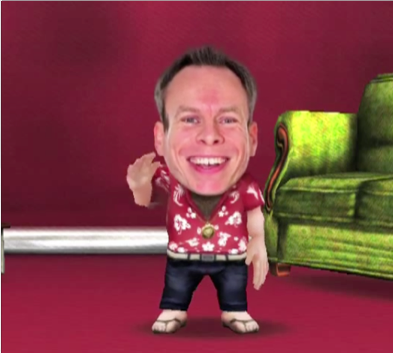 How did designing the app compare to Warwick’s usual acting roles? “For me it was just as challenging and rewarding as doing Shakespeare, and it sounds weird but you give a little bit of yourself to this. A bit of my soul is in that game, every download: it’s a bit like Voldemort. Do you see what I did there? Your iPhone basically becomes a horcrux,” he joked.

App developer and Matmi founder Jeff Coghlan added: “In the future TV is going to be more immersive. It is going to be a two-way stream where you are interacting with people, and taking part, so these sort of things are the beginning of this change. TV and games is all the same thing, there is no difference. I can play a game in the TV, I can have a phone call on the TV: it’s just one thing now. But no one is making the media for that.”

The difference between the usual crop of celebrity-endorsed apps and the Pocket Warwick app is the level of input Warwick has had in its development. Warwick worked closely with the team developing the app. Coghlan told us: “Warwick’s directed it, he’s produced it. It’s been great.”

The Pocket Warwick app was Warwick’s idea from the start. He initially conceived of the idea as a way to combine his interest in technology and his love of acting.

He told us: “I’m tech-savvy. I love gadgets, particularly my phone [we asked if it was an iPhone and he said it was]. I also like acting, and being an actor I’m always looking for ways to develop.”

The result: “I thought, let’s put a character in a phone that actually acknowledges the fact that he is in the device.”

The next step for Warwick was to identify a developer. “So I talked to a company called Offficial who are an app funding development company, and they put me in touch with Jeff, who works for a digital design company [Matmi], and they started work on the game. And between us it was kind of born.”

How long did the process take, we wondered. Coghlan said: “It’s taken most of the year.”

Warwick added: “There’s so much to it, there’s a lot happening on screen in the game, but there’s lots more going on underneath it that is stuff that I don’t understand.

“Probes and all,” Warwick joked.

Coghlan continued: “We also had to do a lot of comedy, a lot of animation, a lot of outfits. For us it’s been a wonderful project because it’s not just making a game, it’s actually the world of media and entertainment coming together. It’s not just a game, it’s actually very funny. Rather than just a celebrity-endorsed app it’s an app made and directed with Warwick himself. And that’s been great for us. It’s been painful. But it’s been great.”

Warwick added: “You have an idea for something but you don’t realise the effort and work that that’s going to involve. The simplest thing sometimes is several days of several people at computers going ‘Oh no! I’m not getting it to work’.”

Warwick also had his work cut out creating the app: “I did over 80 different facial expressions for the game and there’s so much voice. I sit in my office and I’ll do a little recording session and send them out, and then they’ll drop them into the game. I wanted to make sure that as you played the game you get different experiences, he says something you haven’t heard before, that sort of thing.”

Warwick’s determination to create a good game is clear from his enthusiasm for Pocket Warwick.

Coghlan noted: “The problem is that most celebrity-endorsed apps just aren’t very fun. They’re either very funny but you don’t do anything, or you play them but they aren’t funny.”

Warwick commented: “I couldn’t put my name to something like that.”

What sort of game is Pocket Warwick?

Coghlan summed the game up thus: “It’s quite unique, it’s fantastic, but God it’s weird! It’s hard to put it in a category, because it’s like a tamagotchi in the way that it’s roleplay, but it’s also comedy, and somehow it comes together.”

“You can play it as tamagotchi, or delve into the full career path. Or you can dress him up as an idiot.”

“The game is what you want it to be really,” said Warwick. “Feed me, keep me happy, make sure I’m entertained, and look after me. But there’s also a sim element, where you can manage my career: get me from where I start as a Z-list celebrity up to being an A-list celebrity, by sending me off to auditions, but making sure I’m prepared for the auditions, by reading up on the subject of the film, and buying the right outfit, that sort of thing.”

Costumes? We asked if there are any costumes that Warwick is famous for appearing in: like Star Wars Ewok Wicket or Professor Flitwick in Harry Potter. Unfortunately those costumes aren’t available, according to Warwick. “There isn’t a wizard’s outfit at the moment, I don’t think, but there is stuff that you would have seen me wearing in various different things. And of course we can do Halloween-themed stuff, and Christmas.”

If you wanted to buy every outfit available you may well end up spending your own money, but Coghlan claims: “You can actually play the game and not actually pay any money ever and get through it. If you pay a bit more money you can do things, crib up a bit, and fast forward to get things quicker. So there’s no pressure to spend money. You earn money for each job you do. If you are careful with it you can do it. If you waste all your money on nonsense you won’t be able to [finish the game without paying]”.

There are plenty of goodies to interest Warwick wannabes kitting out their virtual pad, and thanks to Facebook and Twitter integration, you can share your latest purchases with your friends.

Warwick explained: “You can share stuff, like what he’s just bought, or whatever, and in turn, in doing that, because you’re raising your profile, that helps you with the game. It’s like you’ve doing your own PR.”

While we are unsure whether we will be sharing anything with our friends via Facebook, comic combinations of costumes may get a few laughs.

Warwick explained: “You take a picture of your Pocket Warwick, showing how he’s dressed, and share that. What’s also funny is combining all of the different elements: there’s a beard that he’d wear if he were a pirate, but you could wear that with a different outfit. There’s an almost infinite number of outfit combinations.”

The game is designed in such a way to ensure that players are not just entertained, but there are lots of hidden things you can discover and different ways you can interact with Warwick.

This is partly due to the Artificial Intelligence behind the game. Coghlan explained: “It learns from what they do. For example, if you watch TV, that can either lower your IQ or raise your IQ. Certain books give you higher IQ than other books. If you read a newspaper you won’t get as high an IQ as reading a big book.”

The Artificial Intelligence isn’t quite on the same level as Siri, but the developers will be using information gained from customers to fine-tune the game in the future. “We’re tracking everything so we will be seeing how users are working. That will be fed back into the statistics so we can finely tune it as the users are using it. It will be constantly fine-tuned,” said Coghlan.

Another time-consuming aspect was designing the physics behind the game. When Warwick is jumping on his trampoline, each outfit he wears reacts differently, and given the number of combinations of outfits available, this was quite a project. Coghlan revealed: “This is great for the user, but not so great for us. We started programming and realised it wasn’t that easy.”

Getting Pocket Warwick on the App Store

Coghlan noted: “Apple know it’s coming, they think it’s funny. They shouldn’t have any problems with approval. Although they can turn down the most ridiculous things. There’s a Maple logo on the computer, for example, but hopefully that will be alright…

“The only issue we could have is if they say, ‘Have you got rights to use Warwick?’ When we did the Gorillas game they asked if we had the rights, and we said: ‘It’s the Gorillas we’ve done it for!’ We’ll also have to prove we have rights to use images, voices, but I don’t think it will be a problem, Apple knows it’s coming. It shouldn’t be an issue at all. I don’t think we’ll have a problem.”

As for where on the app store to find it, “It’ll be top of the free downloads,” said Warwick.

Pocket Warwick is due to launch on Thursday 25 October. It will be a free download for iPad and iPhone, with an Android version coming shortly after.

In another Harry Potter related story today, author JK Rowling has admitted that she is a fan of Apple gadgets. She revealed that: “The MacBook Air changed my life,” allowing her to write “everywhere, including some very strange places. Rowling also said recently that she had discovered the joy of using an iPad to read eBooks, and loves that it enables her to take hundreds of books on holiday with her.