Apple’s new iPad mini was made available for pre-order today. The smaller iPad with a 7.9in display was available from the Apple online store, and Apple Store app from 8:00 am BST.

Customers can pre order all models of iPad mini, and the WiFi models ship to customers on 2 November. Apple has announced that the WiFi + Cellular device will ship two weeks later than the WiFi only models.

The iPad mini starts from £269 and is expected to be a hot item for the holiday periods. Apple pre-orders typically run out towards the end of the first day, at which point the Apple Store starts displaying later dates. It currently displays 2 weeks, which will become 2-3 weeks, then 3-4 weeks as orders fill up..

A number of accessories were also made available with the iPad mini, including the Polyurethane Smart Cover in a selection of covers. The Leather cover was not available at the launch.

Apple also made available today a number of new Lightning accessories including the Lightning to Digital HD adaptor and Lightning to VGA adaptors.

The iPad mini will also be available from Apple Retail Stores on the 2 November launch. Customers typically begin to queue for new Apple product launches in advance. 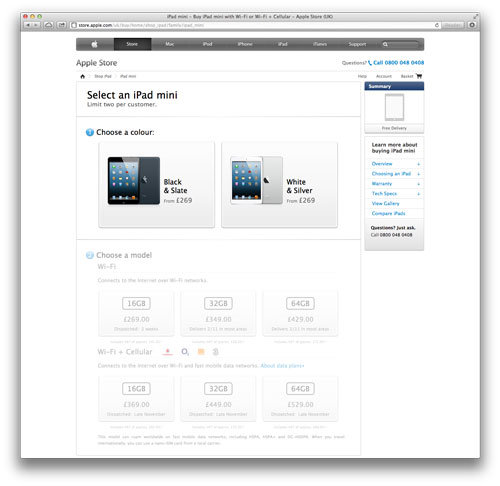